Gor Half-Horn is an infamous Beastman bounty hunter who hunts the underhives of Necromunda's Hive Primus, the capital of that violent Hive World. Gor Half-Horn is a Beastman -- a mutant of the strain Homo sapiens variatus -- and as such is possessed of horribly animalistic features and an unpredictable and violent temperament. These characteristics serve to make Gor a figure of dread in the underhive, but equally, they make him a target for every raving zealot he encounters. As a sanctioned bounty hunter, Gor is entitled, in theory at least, to go wherever he will in pursuit of his targets; in reality, he has often found himself the quarry, though so far none have bested him.

Because it is so rare for a Beastman to be sanctioned as a bounty hunter on Necromunda, Gor has become the subject of numerous legends throughout the underhive of Hive Primus. Some say he was once a member of an Abhuman Militarum Auxilla unit attached to an Astra Militarum regiment, and the sole survivor of a battle of apocalyptic proportions. Others whisper that he was once in the employ of an Inquisitor, whose service he fled for a life among the damned. Some have even claimed that he was not born an Abhuman at all, but a noble scion who developed hideous mutations in his adolescence and fled downhive lest he be put to death by his own kin. None dares to inquire of Gor himself what the truth might be, for all know his response would be swift and lethal. 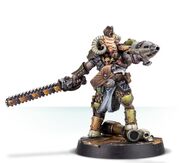 Gor Half-Horn ready for battle armed with his Chainsword and Plasma Pistol
Add a photo to this gallery
Retrieved from "https://warhammer40k.fandom.com/wiki/Gor_Half-Horn?oldid=331034"
Community content is available under CC-BY-SA unless otherwise noted.