The Glaive, also known as the Fellglaive, the Legion Glaive or the Glaive Super-Heavy Special Weapons Tank, was a variant of the highly-advanced Fellblade super-heavy battle tank fielded by the Space Marine Legions during the Great Crusade of the late 30th Millennium and later during the Horus Heresy and Great Scouring in the early 31st Millennium. The Glaive was designed by the Mechanicum as a special weapons vehicle that makes use of the Volkite Carronade, one of the largest known Volkite Weapons ever used by the Imperium. This massive weapon was designed to destroy xenos beasts and incinerate enemy light vehicles in a single fell sweep.

During the Great Crusade the Glaive was issued to all eighteen of the Legiones Astartes in limited quantities, with several of the Legions, most notably the Dark Angels and the Salamanders, having long fielded Glaives as a matter of course. It is known that by the time of the late 41st Millennium, only the Dark Angels and Salamanders Chapters are still able to field these ancient engines of war, the former due to their traditional seniority and honour as the Successors of the I Legion and the latter due to their possession of highly skilled artificers who are still able to maintain and replicate the ancient and arcane technology used by the Glaive. It is not known whether any other Loyalist Chapters or Chaos Space Marine warbands are still able to field these ancient relics of destruction.

The Glaive, or Fellglaive as it is sometimes known, is a super-heavy tank pattern related to the Fellblade, but beyond the obvious surface similarities the two tanks are very different. The reason for this divergence lies with the Glaive's primary weapon system, the fearsome and arcane Volkite Carronade. A device of the Mechanicum whose design is said to originate on Mars in the wars of the Age of Strife, it was not without some acrimony that the Forge Lords agreed to the Emperor's demand for a Legion tank to be created that utilised this weapon. The need however was great, and the Glaive was first deployed against the apex exo-chthon codified as the Catachi Diabolum which had proved such a thorn in the Great Crusade's side. Later the Glaive proved its worth both against the Ork hordes and the stranger xenos monstrosities encountered as the Emperor's crusading armies penetrated the murderous zones surrounding the galactic core. The effort of constructing practical numbers of super-heavy tanks around the Volkite-Carronade was considered well worth the staggering expenditure in resources required, for multiple targets and even the largest of xenos abominations were struck down by its ravening beam before even a portion of its energy was dissipated.

The Glaive's main armament consists of a turret-mounted Volkite Carronade, a massive Volkite Weapon that is capable of destroying enemy vehicles in a single shot. Volkite Weapons produce a deflagrating attack, in which subsonic combustion caused by a beam of thermal energy is propagated through the target by thermodynamic heat transfer, so that hot burning material heats the next layer of cold material and ignites it. The Volkite Carronade used by the Glaive was able to make short work of all but the most heavily armoured enemy vehicles and structures. The Glaive was also armed with other secondary weapons systems, including sponson-mounted Quad-Lascannons and hull-mounted twin-linked Heavy Bolters or twin-linked Heavy Flamers. The sponson weapons could also be replaced with a set of Laser Destroyer Arrays. The Glaive was also usually outfitted with both smoke launchers and a searchlight, but could be equipped with a Hunter-Killer Missile Launcher and armoured Ceramite plating when necessary.

A standard Legion Glaive Super-Heavy Special Weapons Tank is armed and equipped with:

Legion Glaive Super-Heavy Special Weapons Tanks may also have a variety of vehicle equipment such as:

A Glaive of the Iron Hands Legion deployed during the Horus Heresy, (left-side view) 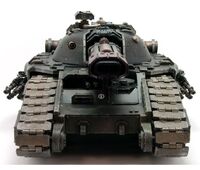 A Glaive of the Iron Hands Legion deployed during the Horus Heresy, (foreward view) 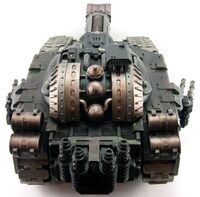 A Glaive of the Iron Hands Legion deployed during the Horus Heresy, (aft view)