A Genestealer Familiar is a diminutive Genestealer-like construct created from the raw psychic energy produced by a Genestealer Patriarch or Magus that manifests in realspace as a living organism.

Should a Patriarch or Magus be powerful enough, the psychic shadow that gathers around them will grow darker and thicker until it begins to coalesce. This ever-shrinking miasma hardens into a many-limbed form -- a Genestealer Familiar. When the Familiar is fully manifested, it skitters from its hiding place and runs to the heel of the xenoform that unconsciously created it.

From that point on, it is as much a part of them as any hand or claw. Small and nimble, such a creature is an excellent spy, able to scuttle through the tightest crawlspaces and report back to the cult's leader through the potent psychic bond that links them.

Should its master be threatened by a physical attack, the Familiar will leap up to claw at the attacker's eyes and throat, gouging its small but iron-hard talons into vulnerable flesh so the Familiar's creator can deliver the coup de grace.

An Alchemicus Familiar often accompanies the Genestealer Cult medicae called a Biophagus, created by a Genestealer Patriarch to aid in the synthesising of xenos biomatter. The Familiar serves as a scuttling assistant that sneaks into safeguarded facilities to disperse chemical agents into watersumps or air filtration bellows.

The Mindwyrm Familiar is created by a Genestealer Patriarch to create and psychically control an Abominant. In order to better herd its Aberrant shock troops to battle, the Patriarch visits its blessings upon a chosen Aberrant in each gene-sect. He does so using a Mindwyrm Familiar, a diminutive xenos creature that is both progenitor and guide to the larger entity.

A bio-psychic construct that is given life in the decaying slurry that gathers in the Patriarch's lair, it is the Mindwyrm Familiar's role to implant the soon-to-be-Abominant with a portion of its master's own biomass and genetic structure. It does so with a strange echo of the Genestealer's Kiss, implanting its tiny ovipositor into the toughened hide of the Aberrant and placing a potent gene-curse within its cellular structure. Thus is an Abominant born.

The Mindwyrm Familiar does not depart after this strange gift is given, but continues to exert the will of the Patriarch on the Abominant. It uses the hulking thrall's bulk to break open enemy lines by shepherding it headlong into the most redoubtable foes, where its hammer smashes an opening by sending warriors flying. The creature's Aberrant kindred blindly follow the lumbering brute into the fray, incited to ever-greater acts of slaughter.

Sanctuses are accompanied on their missions by Genestealer Familiars that act as the Patriarch's ever-watchful eyes. When the gene-sire of the cult slides its loathsome form back into its genesis pool, it immerses itself in a flood of genetic memories.

Familiars themselves are formed from this psychic miasma, and when lurking beneath the surface of its bio-slurry, a Patriarch can see through the eyes of these scuttling psychic manifestations, better directing its silent blades towards the desired target. 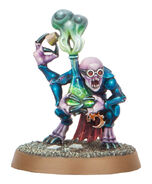 An Alchemicus Genestealer Familiar, a common companion for a Biophagus

A Mindwyrm Familiar, the psychic guide for a hulking Abominant 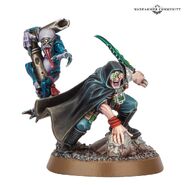 The Genestealer Cult assassin known as a Sanctus is gifted with supernatural abilities and a powerful Soulsight Familiar to stalk his prey through the fog of war.
Add a photo to this gallery
Retrieved from "https://warhammer40k.fandom.com/wiki/Genestealer_Familiar?oldid=345435"
Community content is available under CC-BY-SA unless otherwise noted.