"In my hands rests the fate, not solely of my Chapter and my brethren, but of scores of worlds. Hundreds. With but a single command I can save a trillion faithful souls, or condemn them to death, or worse. Those who have not carried such a burden cannot imagine its cost. Yet I could not wish for a greater honour. The Emperor forged me for this duty, and I shall never fail him."

"In too deep, against all odds brothers!"

The Genesis Chapter is a Second Founding Successor or Primogenitor Space Marine Chapter of the legendary Ultramarines. The Chapter's homeworld is the planet Newfound which is located a comparatively short distance to the galactic northwest of the Ultramarines' Realm of Ultramar, and its Astartes commonly undertook at least one pilgrimage to the Shrine of the Primarch on Macragge before his resurrection in 999.M41.

First amongst the Ultramarines' Primogenitor Chapters to be raised (and hence their name), the Genesis Chapter is dogmatically loyal to the Imperium of Man and the memory of their Primarch Roboute Guilliman, and can be counted upon to fight at the Ultramarines' side without hesitation.

Upon their inception, the Genesis Chapter's first battle wrested the planet Newfound from the clutches of the traitorous Word Bearers, and it has been their Chapter planet ever since. The Chapter has remained dogmatically faithful to the teachings of the Codex penned by its Primarch for nearly ten millennia.

The Genesis Chapter has always had the proud distinction of being the very first of the Primogenitors of the Ultramarines Legion. It was formed from the noblest Ultramarines Veterans who survived the Horus Heresy. They have always venerated Roboute Guilliman, and were one of the first Chapters to seek out the Primarch upon his revival in 999.M41 following the Ultramar Campaign of the 13th Black Crusade.

They knelt as one and pledged themselves to the eternal service of the resurrected Lord Commander of the Imperium. As such, they were among the first of the existing Chapters of the Adeptus Astartes to have their ranks bolstered by Primaris Space Marines created during the Ultima Founding.

Following the break-up of the Space Marine Legions into smaller fighting forces during the Second Founding, Roboute Guilliman laid down the organisational dictates in the Codex Astartes that would become a part of every Chapter from then on. Though some would later stray from the precise structure laid out in the Codex, most Chapters remain faithful to its teachings.

The Genesis Chapter is split into 10 companies, each 100 Space Marines strong and led by a Captain. The 1st Company consists of battle-hardened Veterans and is, invariably, the most powerful and skilled within the Chapter. It is also the only company capable of fielding warriors clad in Terminator Armour.

The 2nd through 5th Companies are the Chapter's Battle Companies and these are composed of a mix of Tactical, Assault and Devastator Squads. Each Battle Company is a self-sufficient battlefield unit, capable of meeting any threat and defeating it. These form the backbone of the Chapter and bear the brunt of the fighting.

All Genesis Chapter Scout Marines once undertook a pilgrimage to Macragge to look upon the visage of the Primarch, frozen in timeless stasis, and believed their training to be incomplete until they had knelt in spiritual communion for at least an entire day at the feet of their gene-father. Since Roboute Guilliman's resurrection, this custom has become obsolete.

As befits a Chapter that is the Scion of Guilliman, the Genesis Chapter emulates their forebears by strictly adhering to the tenets laid down in the Codex Astartes. Since their inception, they have fought in the manner described in its holy pages. Other Chapters may freely interpret the words of Guilliman but, to the Genesis Chapter, such deviation is unthinkable. The Codex has literally hundreds of pages devoted how to overcome any given tactical situation and emerge victorious in the name of the Emperor.

Each Genesis Chapter Battle-Brother does his utmost to study and memorise the Codex so as to enable an individual company to have an entire record of the Codex' teachings contained within the mind of every single Space Marine. Because of their close ties with their Progenitor Chapter, the Genesis Chapter and the Ultramarines frequently undertake joint operations. Genesis Chapter squads will routinely fill gaps within the Ultramarines' companies should they fall below strength due to attrition or other commitments. This includes the secondment of individual Genesis Chapter Battle-Brothers to fill empty specialist positions such as that of Librarians and Techmarines.

As a Primogenitor Chapter, the Genesis Chapter is generally held to be the closest of the Ultramarines' Successors, both doctrinally and astrographically. The Genesis Chapter are dogmatically loyal to the memory of Roboute Guilliman, whom they venerate not only as their founder, but as the saviour of the Imperium.

These Astartes hold to the wisdom of the Codex Astartes in every possible way. The Chaplains of the Genesis Chapter regard the words of the Codex Astartes as utterly sacrosanct, going to great lengths to ensure the Chapter's adherence to its tenets. If there is a point of contention in regards to the Codex, it is thoroughly debated, with the opinions of the Ultramarines' Chaplains as a recourse for final ratification. This ensures there is no doctrinal rift between Progenitor and Primogenitor.

The Ultramarines gene-seed is by far the purest stock of Astartes gene-seed in the Imperium and there are no known aberrations in its genetic structure. Every one of the esoteric organs utilised in the arduous creation of a Space Marine by the Genesis Chapter is fully functional.

The terrible schism known as the Horus Heresy highlighted weaknesses inherent in the gene-seed of several other Space Marine Legions and this was exacerbated by the accelerated zygote harvesting techniques used to keep the Legions up to full strength during that terrible conflict.

When the Legions were broken down into Chapters after the Heresy, a genetic repository was set up on Terra to store their gene-seed and monitor its purity. As the largest of the Space Marine Legions, the Ultramarines' contributions to this resource was greater than that of any other Legion and, as a result, their gene-seed became the stock type for many of the Second Founding Chapters.

Those Chapters created from the Ultramarines gene-seed stored on Terra are known, collectively, as the Primogenitors or "first born", and they also venerate Roboute Guilliman as their founding father.

The Aquila or Imperialis on the chest guard is yellow.

The Sergeants' badges are blue instead of red but otherwise there are few differences between the Chapters in terms of rank and company iconography.

Senior Sergeants of Veteran status are proclaimed by a golden skull added to the helm, while less senior Sergeants instead wear a white skull in its place.

Veteran status is indicated by a white helmet stripe.

The Genesis Chapter's badge is a black Greek letter Lambda or an upside-down "V" on top of a black-outlined white triangle. This is centred on a field of red.

The effect of the design is to create a Greek letter Alpha, which is an ancient Terran symbol for a new beginning, or "genesis." 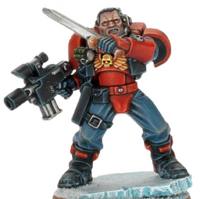