A Gauss Pylon is a mysterious static Necron defence turret armed with a potent Gauss Weapon known as a Gauss Annihilator. Gauss Pylons were first encountered and recorded by the Imperium on the uncharted Tomb World of WDY-272. Rising suddenly from the desert sands, the Gauss Pylons opened fire without warning and with devastating effect. Tanks and armoured carriers burned as the crescent-shaped weapons tore through an unsuspecting Astra Militarum column whilst resisting all return fire.

Necron attacks supported by Gauss Pylons often teleport to the surface of a planet, or suddenly rise from the ground after their long dormancy to engage any trespassers upon a Tomb World. A Gauss Pylon is incredibly well-armoured for its static defence role, and is able to hold off, or destroy, whole armies alone whilst further Necron reinforcements teleport into combat all around it. 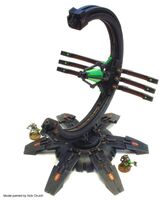 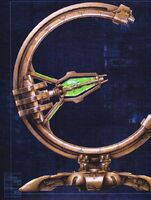 A Gauss Pylon deployed by the Necrons during the Orphean War
Add a photo to this gallery
Retrieved from "https://warhammer40k.fandom.com/wiki/Gauss_Pylon?oldid=332208"
Community content is available under CC-BY-SA unless otherwise noted.