The Furioso Pattern Dreadnought is nigh-unstoppable in close combat, as its heavy armour and powerful weapons allow it to tear through most types of enemy armoured vehicles with ease.

True Furioso Dreadnoughts that are used by the Blood Angels and their Successor Chapters are equipped with versions of these two close combat weapons known as "Bloodfists" and "Blood Talons," respectively. However, other than the difference in names, there is no known differences between these weapons and their more standard versions.

The Furioso Dreadnoughts of the Blood Angels and their Successor Chapters can also be equipped with two Dreadnought-class weapons that are rarely seen amongst the armouries of other Chapters. The first of these is the Frag Cannon, a large ballistic cannon that fires massive fragmentation shells which are extremely effective at close-range, and the Magna-Grapple, a weapon that fires several yards of tempered adamantium chain attached to powerful magnetic and gravitic field generators. When fired at an enemy vehicle, the Magna-Grapple's chains form an unyielding bond with the enemy vehicle's hull, allowing the Dreadnought to pull the vehicle in closer to finish it off with its main close combat weapons.

The Furioso also possesses several smaller ranged weapons that it can use during combat, such as Storm Bolters, Heavy Flamers and Melta Guns that are attached under its fists or installed on the bottom of its torso. The Furioso Dreadnought can also be outfitted with extra armour plating, smoke launchers and a searchlight.

There are several variants of the Furioso Dreadnought that are only used by the Blood Angels and their Successor Chapters: 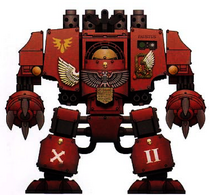 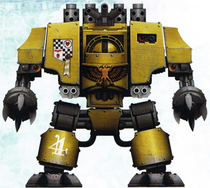 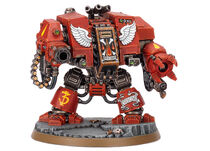 A Furioso Dreadnought of the Blood Angels Chapter armed with a Bloodfist, an under-slung Heavy Flamer, and a Frag Cannon
Add a photo to this gallery
Retrieved from "https://warhammer40k.fandom.com/wiki/Furioso_Dreadnought?oldid=346254"
Community content is available under CC-BY-SA unless otherwise noted.