"OI! Lissen ta me wen I'z talkin' to ya! We'z gonna go on 'dere ship, we'z gonna smash it up an' kill anyfing dat gets in our way, an' den we'z gonna get back on da boat an' go home. Dat'll show 'em. Do you lot of 'umie runts unnastand dat? Good. Now, wiv me: WAAAGH!"

A Freebooter (pl. Freebooterz) is a piratical Ork who exists on the fringe of Ork Kultur. Freebooterz are greenskin bandits and sell-swords belonging to no specific tribe or klan but who will work with any tribe as well as stand against any other if the price is right.

Some of these Orks are fugitives, eccentrics and the remnants of shattered greenskin tribes and klanz, so it is hardly surprising that many Freebooterz have very treacherous and unpleasant characters indeed -- even by Ork standards. Following the ravages of war or some other disastrous disruption of their lives, some Orks abandon what is left of their tribe and join one of these roving bands.

Most Freebooter mobz hire themselves out as mercenaries, or else they can be persuaded to join in a battle with promises of loot. Among the Freebooterz are a handful of unstable individuals who are particularly dangerous and aggressive (again, even by Ork standards). These Orks wander off and tend to form their own small, roving band of pirates and corsairs. Naturally, they are eager for adventure, combat and booty and are quite happy to tag along with other Ork tribes and WAAAGH!s as mercenaries.

Forsaking their former klans' distinctive apparel, Freebooterz wear styles of dress intended to emphasise their mercenary status, decorating themselves in flamboyant clothing and piercings such as ear and nose rings. Having long since abandoned any tribal or klan loyalties, they have adopted highly personalised insignia in place of their former klan symbol.

Some of these Orks prefer to remain anonymous, some want to forget, some want to start a new life, but most have simply forgotten who they were. Often they will employ what the Imperium has named the "Jolly Ork" skull and crossbones icon, a universal symbol of all Freebooterz.

These mercenary Orks are known to use this sigil to adorn their banners, clothes and vehicles. Freebooterz are also recognized by the rag-tag appearance of their Ork bioniks, due to their lack of access to Painboyz or Mekboyz. Their injuries are often superficially treated, thus many Freebooterz sport peg-legs, hooks for hands and eye-patches.

The pirate band serves as these outcast Orks' new home. As a result, they roam the universe in small, often dilapidated Ork spacecraft, and hide out on isolated planets and large asteroids.

The band is usually led by a hardened Warboss who prefers the title "kaptin." These individuals are the biggest, strongest and most cunning cutthroat Orks within these mercenary warbands. They dress even more flamboyantly than their fellow Ork Freebooterz, often sporting large tricorne hats and thick greatcoats that can conceal numerous weapons.

There are those who would claim that the Orks are not the greatest of spacefaring races, that their voidships and weapons are unreliable constructions of scrap and parts salvaged from the ships of the other star-faring races, crudely refitted by luck rather than judgement.

There are others, however, who point to the fact that the Orks can be encountered in every corner of the galaxy and the supposed limitations of their technology have not held them back from being some of the most feared and effective pirates among the starfaring peoples.

Their ships are massively armed and loaded with Orks eager for a fight, and an Ork's natural love of violence and acquisition make him a terror to other interstellar races.

Ork Freebooterz want more of everything: more weapons to grow stronger, more salvage to build ships and war machines, and more wealth for prestige among their kind. While many items captured in raids are of little use to the Orks, such plunder is valued highly by other races that fight and die to protect it. Thus, the value lies in the opportunity for battle, and no Ork shirks from a good fight!

Orks rarely organise above the level of a single starship. However, small fleets can form around a particularly charismatic or successful Ork leader, known as a kaptin. To the mind of an Ork Freebooter, two things are uppermost: battle lust and greed.

In the Koronus Expanse, Orks are usually encountered in small raiding ships, roughly the same size as an Imperial escort vessel. However, the size of an Ork voidship is deceptive: invariably, the ship is crammed with a green tide of Orks, which ensures that any boarding action is likely to only go one way.

An attack by Ork Freebooterz tends to be brutal and direct, with the Ork ships rushing headlong toward the enemy firing every gun they have before ramming and boarding their victims. The directness of an Ork Freebooter attack does not mean, however, that an Ork Freebooter kaptin lacks cunning. Orks often lurk in asteroid fields on the edges of star systems where they cannot be seen by the sensors of ships passing to or from the void. Ambushes on convoys of supply ships from this kind of hidden position are common, and even small fleets or warships are not unheard of.

Should an Ork Freebooter kaptin feel the need for bigger prey, the crew may descend on an inhabited world or space station, loot and burn it, and withdraw to their ships and the protection of a debris field.

If, however, the Orks of a Freebooterz fleet are really spoiling for a big fight, they are likely to brutalise a world or void station and just wait and see who or what turns up to try and stop them.

Freebooterz in the Koronus Expanse

Ork Freebooterz lurk throughout the Koronus Expanse in the region of the Halo Stars beyond the Calixis Sector. From crude space stations built in asteroid fields or debris clouds, numerous Ork Freebooter Kaptins lead their fleets to loot whatever they can find and fight whoever crosses their path.

Even the relatively explored star systems close to the Maw have all felt the iron fist of Ork piracy; in the past Footfall itself has come under attack from the ships of Ork Kaptins who had become powerful enough to command great swarms of gunships and kroozers.

Luckily for those journeying into the Expanse, the presence and predations of the many Ork Freebooter fleets is haphazard and without unified purpose, and they are often inclined to war upon their own kind as much as anything else. 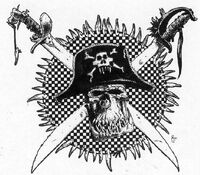 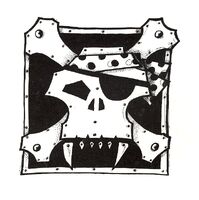 A variant "Jolly-Ork" sigil used by the infamous Kaptin Badrukk 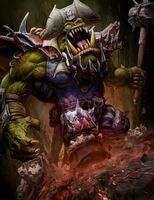 Ork Freebooterz launching another planetary raid
Add a photo to this gallery
Retrieved from "https://warhammer40k.fandom.com/wiki/Freebooter?oldid=377583"
Community content is available under CC-BY-SA unless otherwise noted.