"Of all the vices you Imp'ral possess, I find the one you call 'greed' the most fascinating. That you would sell your secrets, betray your kin-blood, and even enslave your own race to us, and for what? Mere trinkets and toys -- for the least of our crafts. Most amusing..."

The Fra'al are a mysterious, highly psychic and technologically advanced xenos race occasionally sighted in the Gothic Sector, and they are known to rule an interstellar empire within the Segmentum Obscurus. As accurate knowledge of the legendary Fra'al species is strictly prohibited by the Inquisition's Ordo Xenos, aside from a few scattered stories, Mankind remains blissfully ignorant of this merciless, highly psychic race. The few that know them describe them as "mysterious" and "monstrous." The Fra'al, in turn, call humans the "Imp'ral," and enjoy subverting them through the smuggling of what they view as relatively simplistic technology. The Fra'al have engaged at time in trade with the Imperium, usually targeting Rogue Traders who are active in the so-called "Cold Trade" -- the illegal sale of xenos artefacts and technology within Imperial space.

Not much is known of the Fra'al and their society. They appear to organise in groups called "Conclaves," and to be led by rulers known as "Satraps." They have psykers of their own, who wield what has been described as "nightmarish psy-arcana."

The Fra'al are known to deploy powerful Battlecruisers into deep space and use them to either protect their worlds from orbit or to use two of the vessels to raid various merchant convoys and star systems. Sometimes, operating in pursuit of their own obscure agenda, Fra'al raiders may interfere with the voidships of other intelligent, starfaring races and in some cases may even initiate open conflicts. No one knows why they fight in this way, what technology they use, what they seek, or who they truly are as a people.

During the Great Crusade, the Salamanders and Word Bearers Legions first fought against the monstrous Fra'al at the Sarapis Compliance action. This conflict resulted in the widely-lauded Legionary Eduhkar being interred within the sarcophagus of a Contemptor Dreadnought as a result of irreparable wounds.

Also during the Great Crusade, following a cataclysmic encounter with the Fra'al, the infamous Alpha Legion Destroyer Marine Nehalen the Interitus was also confined to the metal shell of a Contemptor Dreadnought.

By the time the world of Galaspar was discovered and invaded by the Death Guard Legion during their first campaign of the Great Crusade after being reunited with their Primarch Mortarion, its Battlegroup Gorgon V and the White Scars Legion were occupied harrowing the retreat of the defeated Fra'al Sistrum from the Ophidia Deeps.

At another point during the Great Crusade, an entire Fra'al Conclave harried the retreat of the 67th Expeditionary Fleet. In order to try and save the fleet from destruction, Captain Kheron Ophion of the Night Lords Legion ordered his ship, the Killing Whisper, to stand its ground against the xenos attackers until it was destroyed. Later, the Praetor of the 67th Expeditionary Fleet had some fragments of the vessel's broken hull crafted into a suit of armour called the Bloody Aegis -- as much a trophy of glory as a mark of shame and cruel jest to remind Ophion of the cost of his bravery.

In 843.M30, the Rogue Trader Casilida DeAniasie engaged in battle with Fra'al corsairs and her galleass was damaged and flung far off-course, which led to her discovery of the Forge World of Xana II.

Some six hundred Terran years before the Gothic War, Imperial Navy Captains Rutgen Jago of the Lord Solar Macharius and Hendrik Morrau of the Vengis fought against a force of Fra'al raiders in the Osiris Cluster. Also, the Emperor-class Battleship Divine Right destroyed the Fra'al Battleship Sharak-Fraka at some point between 306.M41 and the outbreak of the Gothic War.

Commodore Vandez, of Battlefleet Gothic's 202 Red Squadron, also chased down Fra'al raiders in Bhein Morr at some point before the Gothic War. Lastly, during the Gothic War itself, the Mars-class Battlecruiser Marquis Lex spent some 1,741 solar days on anti-pirate duties, patrolling the Hammerhead Deeps and across the Quinrox Sound, taking part in forty-eight smaller encounters with Ork, Human, Eldar and Fra'al raiders.

There is only one type of Fra'al starship known to the Imperium, the so-called "Fra'al Battlecruiser." The most significant threat from these Battlecruisers comes from the Ether Cannon they mount, which fires a pulsed directed energy beam of unknown origin at the target ship. This "ether field" corrodes the hulls of other voidcraft, ignoring Void Shields in the process.

A nasty side effect of the ether field is a tendency to overload energy shields, allowing the Fra'al Battlecruiser to follow-up the attack with a barrage of Lance fire. Even the Eldar have found this terrifying craft a threat, as the ether field can affect a starship despite the best attempts of Eldar Holo-Fields to divert and disperse the energy.

Luckily from the Imperial standpoint, Fra'al Battlecruisers seem to be deployed sparingly and raid infrequently. The Xenarite Runic Priest Hieronomus Tezla of the Adeptus Mechanicus won great renown amongst his fellows for his audacious examination of a crashed Fra'al spacecraft in the Tamahl Sector and his subsequent etheric-plasma theorums.

Chaos Idolator-class Raiders are known to incorporate many systems and features which are of obviously non-human origin, some of which were probably bought or stolen from Fra'al raiders.

Psi-construct war engines were known to be possessed by the psychically potent Fra'al, some of which easily matched the Psi-Titans of the Ordo Sinister in scale if not always in form.

Another example of technology of likely Fra'al origin is the Fra'al Glass Knife. This is a vicious melee weapon of xenos make that has long been a staple of the black market trade on the Halo Stars frontier. Glass Knives are jagged, dagger-like blades, seemingly crafted from a single piece of smoky crystal. Renowned for their strength, they are sharp enough to split ceramite. Glass knives maintain their sharpness by continually fracturing tiny shards from their cutting edges, and these splinters are infamous for working their way into wounds, causing agonising injuries. Smugglers' lore among those that operate on the border of the Halo Stars attribute the blades to the legendary Fra'al, although many insist this is merely speculation.

While the Battlefleet Gothic rulebook states that the Fra'al Empire is located in the Segmentum Obscurus, and in Planet Killer #1 it is stated that Fra'al Battlecruisers are used to defend their race's planets, in the RPG supplement Dark Heresy - Disciples of the Dark Gods these aliens are described as "nomadic." 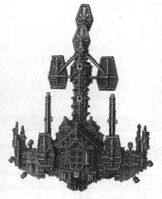 Fra'al Battlecruiser (dorsal view).
Add a photo to this gallery

Retrieved from "https://warhammer40k.fandom.com/wiki/Fra%27al?oldid=329229"
Community content is available under CC-BY-SA unless otherwise noted.