A Foul Blightspawn is a Chaos Space Marine specialist utilised exclusively within the ranks of the Death Guard Traitor Legion. These cruel and malignant warriors typically rise from the ranks of the Plague Marines. They take sick pleasure in watching their victims suffer in the grip of Nurgle's plagues. The malevolent sadism that festers within their black souls results in ever more grotesque physical degeneration, transforming them into foul creatures of such horrible visages and reeking foulness, that it causes even their fellow Plague Marines to take pause in their noxious presence.

On the field of battle, these foul servants of the Plague God spread putrescence and disease with their Plague Sprayers, melting armour, flesh and rotting the souls of their unfortunate victims from within. They further spread the epidemics of Nurgle by lobbing virulent Blight Grenades into the ranks of their enemies, which detonate in sprays of infectious shrapnel and toxic slime, spreading woe and sickness.

A revolting stench wafts around the Foul Blightspawn, his corruption clotting the air itself. Breath rattles through pus-slick tubes as he cranks the rusted handle of his malignant churn, bellows wheezing and plague slop roiling in the incubatum upon his back. Some foes stare in bewilderment at this strange performance. Some direct their fire at the Blightspawn, shots rebounding from his armour or thumping harmlessly through rotted flesh in sprays of effluence. The wise flee for their lives. With a grunt of satisfaction, the Blightspawn deems his mixture ready, and raises the nozzle of his Plague Sprayer. A gurgling surge, a peristaltic urging, and a fountain of stinking slime engulfs the enemy. Flesh melts like wax. Armour bubbles and corrodes. Souls rot and bones crumble. As the last of his targets devolve into infectious sludge, the Blightspawn chuckles and nods to himself, before lumbering on in search of fresh victims.

Foul Blightspawn rise from amidst the Plague Marine ranks of the Death Guard, typically those warriors who feel joy in watching their victims suffer in the grip of Nurgle's plagues. Malignant cruelty festers in their souls, manifesting itself in ever more grotesque physical degeneration. Their flesh bulges with putrid flab until it becomes translucent. Their eyes dribble from their sockets as black slime, leaving the Blightspawn to "see" only in shades of Warp energy. Their mouths twist into fanged, puckered spouts, and a wretched stench seeps from their pores, so foul that it causes even Plague Marines to balk. All the while, forbidden secrets of Nurgle's plaguecraft blossom in the Blightspawns' minds, compelling them toward obsessive alchemy and the joyous brewing of noxious disease.

When such manifestations occur, the new Blightspawn is sent to the disease factories of the Plague Planet. The foul gears and pistons of a malignant churn are forcibly driven into his guts, and an incubatum is sutured to his armour, never to be removed. Amidst the virulent laboratories and bubbling plague vats, the Foul Blightspawn gather to learn from the eldest and foulest of their number, beings so bloated with corruption that they have taken root amidst the disease factories like obscene toxic fungi. Sub-sects congeal about these disgusting beings, labouring obsessively to brew the perfect diseases as tribute to the Plague God himself.

When the Foul Blightspawn rejoin their vectoriums, they bring their hideous alchemical lore with them. Inside their incubatums are batches of their latest, finest work, ready to be unleashed. Fortunately, the battlefields of realspace are ripe with test subjects... 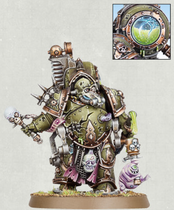 A Foul Blightspawn outfitted with his Plague Sprayer
Add a photo to this gallery
Retrieved from "https://warhammer40k.fandom.com/wiki/Foul_Blightspawn?oldid=355413"
Community content is available under CC-BY-SA unless otherwise noted.