The Foresworn are a warband of Chaos Space Marines drawn from the Word Bearers Legion. Like their parent Traitor Legion, they are dedicated to Chaos Undivided.

Like the Traitor Legion of which they were a part, the Word Bearers, the Foresworn's Power Armour was the same colour of spilt blood, a colour often called "Traitor's Red" or "Betrayer's Red," after the Word Bearers changed their colours from slate grey to red during the Horus Heresy. This colour was sometimes worn with black or silver trim. Heretical prayers are inscribed directly into the surface of the Foresworn's armour. Often times the Foresworn are also seen wearing devotional prayer sheets hanging from their armour's shoulder plates, the blasphemous words of the Book of Lorgar inscribed upon them.

This warband typically adopts the symbol of the Word Bearers Legion, the Latros Sacrum, a stylised representation of a roaring, horned daemon's head wreathed in flames, which represented all that the XVII Legion stood for, all that they believed in so deeply and all that they were willing to kill and die for. 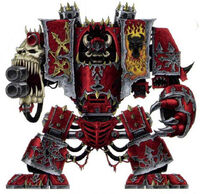 The Hell Feaster, Chaos Dreadnought of the Foresworn
Add a photo to this gallery
Retrieved from "https://warhammer40k.fandom.com/wiki/Foresworn_(Word_Bearers)?oldid=308138"
Community content is available under CC-BY-SA unless otherwise noted.