The Forces of Order was a brief alliance forged between Farseer Taldeer and the Aeldari of Craftworld Ulthwé she commanded and the Astra Militarum forces under the command of General Sturnn. These two factions fought alongside each other against the Orks and the Forces of Chaos during the Imperial campaign on the Ice World of Lorn V.

The temporary alliance was dissolved by mutual consent after the alliance proved victorious over the Forces of Disorder, which was an alliance of convenience between the warband of World Eaters Chaos Space Marines under Lord Crull and the Warboss Gorgutz 'Ead 'Unter of the Orks.

An Aeldari Warrior of Craftworld Ulthwe 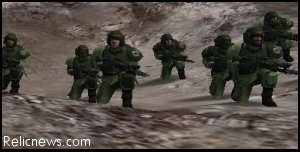 Imperial Guardsmen on Lorn V
Add a photo to this gallery
Retrieved from "https://warhammer40k.fandom.com/wiki/Forces_of_Order?oldid=336252"
Community content is available under CC-BY-SA unless otherwise noted.