A Focussed Death Ray is a ferocious Necron armament that is mounted as the primary weapon on a Sentry Pylon. The coruscating beams of force emitted by the Focussed Death Ray are able to slice through entire ranks of enemy soldiers and whole columns of armoured battle-tanks with contemptuous ease.

Utilising an advanced focussing array, a Sentry Pylon is able to project its crackling ray over far greater distances than previously encountered versions of the Death Ray weapon, and with a destructive potential that is horrifyingly effective. When fired, the narrow beam of intense thermal energy fired by a Focussed Death Ray will vaporise everything along its line of fire, and often passes through several enemy units before the energy finally dissipates; leaving nothing but a line of charred ruin in its wake. 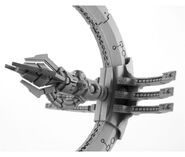 Close-up view of a Focussed Death Ray mounted on a Sentry Pylon
Add a photo to this gallery
Retrieved from "https://warhammer40k.fandom.com/wiki/Focussed_Death_Ray?oldid=336469"
Community content is available under CC-BY-SA unless otherwise noted.