"They vilify us for our methods, yet nobody questions the results. We are the chosen Scions of Sanguinius, tempered weapon of the Emperor Himself. Our enemies quake with fear even before we strike first blood. They will soon know it is a fear well founded! Let them fear the Angels of Death, let them fear what is left of their short future; let them pray for death. Brothers, we will answer those prayers."

— Force Commander Isiah of the Flesh Eaters during the Golance War, 987.M41

The Flesh Eaters are a Loyalist Space Marine Successor Chapter of the Blood Angels, raised during an unknown Founding. A savage and bellicose Chapter, despite their sobriquet of "Flesh Eaters" there is no evidence that the Chapter's Astartes actually practice cannibalism.

Little is known about the origin of the Flesh Eaters beyond their descent from the Blood Angels, save for the fact that they were already active at the close of the 33rd Millennium, when they joined the Pentarchy of Blood that ended the War of the False Primarch by exterminating eleven rebellious Chapters and razing their homeworlds.

The Flesh Eaters are currently believed to have been "fatally undone by their gene-seed," but what this actually refers to is unclear, as the Chapter is not extinct and was able to send forces to Baal in order to help their parent Chapter in defeating the onslaught of Hive Fleet Leviathan during the Devastation of Baal. The Flesh Eaters' lowest-known ebb was during the Golance War, where they lost at least 350 Astartes, including several officers, fighting against the Aeldari who had taken control of the planet's secret arsenal.

Like their fellow Successor Chapters, the Flesh Eaters appear to be strongly bound to their primogenitor Chapter, the Blood Angels; united by blood and tradition in a way difficult for outsiders to understand.

To attack any one of these Chapters is to invite the wrath of all, for whatever differences and rivalries might exist between them, they are all the Scions of Sanguinius, whose unquestioning loyalty to their Primarch's memory transcends all other duties and concerns.

The Flesh Eaters employ the gene-seed of Sanguinius, inherited directly from the Blood Angels Chapter or some other Successor Chapter. This means they are subjected to the Flaw, and therefore suffer both the Red Thirst and the Black Rage. In fact, the Flesh Eaters are said to have been fatally undone by their gene-seed, although what this means exactly in terms of the affect upon the Chapter's viability is unclear.

"This symbol I wear upon my shoulder and I bear upon my banner. He who defiles it defiles me, and shall be damned for all eternity."

—Brother Ukadi, prior to the conclusion of the Alvatine Suppression

The Flesh Eaters wear bright red Power Armour with a single white vertical stripe painted on the front of the helm.

It is unknown whether they use the same unique heraldry common to most Blood Angels Successor Chapters to display their company and squad designations.

Apothecaries of the Flesh Eaters have both of their shoulder pauldrons painted white, while the famous Jaws of Doom Assault Squad is known to decorate their helms with snarling maws and to use an alternative badge -- a monstrous white skull on a black circle.

The Flesh Eaters' Chapter badge is a stylised, white, monstrous jaw centred on a field of bright red. Sometimes the colours appear inverted, or the symbol resembles dripping shark jaws.

Apothecary of the Flesh Eaters

A Flesh Eaters Rhino APC deployed as part of the Alvatine Suppression spearhead force, detailed in a desert camouflage pattern 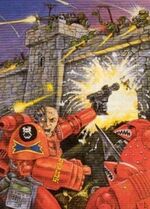 The infamous "Jaws of Doom" Assault Squad launches a frontal attack on a heavily defended Ork fortress
Add a photo to this gallery
Retrieved from "https://warhammer40k.fandom.com/wiki/Flesh_Eaters?oldid=351991"
Community content is available under CC-BY-SA unless otherwise noted.