Flash Gitz are an elite breed of Ork Nobz who are obsessed with their lovingly customised, ostentatiously polished and painted weapons known as Snazzguns that can potentially wipe out entire squads of infantry in a hail of fire. Unlike other Nobz, Flash Gitz prefer "more dakka" to being "stompier," that is to say, they have a preference for ranged fire over melee combat. They are powerful ranged heavy infantry troops for an Ork WAAAGH!. Many Flash Gitz are members of the Bad Moons Clan, where they serve as the clan's elite infantry. In addition to their powerful armament, Flash Gitz often wear garish armour, adorned with bionic eyes (usually called Gitfindas) and skull trophies mounted on their weapons or upon their back. Due to their hulking size and powerful musculature which is typical for Ork Nobz, they are still capable close combatants with their Choppa Bayonets and Sluggas. Flash Gitz consider themselves to be at the top of Ork society, having accumulated large numbers of Ork teeth. Many love to flaunt their powerful weapons to other Orks, and are often accompanied by well-dressed Grotz who often boast of their master's achievements. Flash Gitz are sometimes kicked out of Ork tribes for their wealth and general obnoxious behaviour though, which can lead to them going down the path of a Freebooter.

When a Warboss wants to invade a planet, he calls on fleets of Freebooterz to see off enemy ships and clear the way for the Orks to get down to the surface. For this service Freebooterz claim exorbitant scavenging rights as well as a fortune in teef, and a Warboss has little choice but to pay up if he wants their help, as Freebooterz that don't get their price often simply vanish into the void in search of more loot. Even if a Freebooter's terms are met, he might still get distracted by better prospects, the lure of easy plunder enough to sway most kaptins. Whether they fight alongside a WAAAGHH! or tear around the void raiding planets and stealing ships, Freebooterz often become disgustingly rich, leading many to become Flash Gitz. Ork Freebooterz are by no means always Flash Gitz, but all Flash Gitz eventually end up as Freebooterz. Arrogant and boorish, a Nob who fancies himself a Flash Git will normally alienate himself in short order from the rest of his tribe. Whether because of his grating self-aggrandisement, eating the local Big Mek's favourite grot oiler without permission, or committing the cardinal sin of strutting about with a bigger, shinier shoota than the Warboss, a Flash Git will normally find himself ejected from his tribe. When a whole band of Nobz get ideas above their place in the order of things within the tribe all at once, it can lead to bloody infighting. This will usually end up with the departure – at gunpoint or otherwise -- of a whole mob of newly freebootin' Flash Gitz.

However they find their way into this new situation, Flash Git mobs will quickly take to the Freebooter life. Fighting as mercenaries allows successful Gitz to accumulate vast sums of wealth in a short space of time. Even better, they can gleefully spend it all on themselves without a Warboss around to take his cut. With teef galore flowing into their coffers, successful mobs of Flash Gitz will soon be riding through the void in their very own kill kroozer while wielding the kind of firearms that Deathskulls Lootas can only dream of stealing. They bedeck themselves with natty finery, even their Grot minions get stuffed into gold-buttoned frock coats and brag loudly of their masters' wealth. Flash Gitz also sport profusions of piercings, furs, glyph-plates, brightly coloured pirate garb and extravagant hats. All of this showy nonsense does absolutely nothing though to hide the hulking, muscular bulk and bestial lethality of the Flash Gitz themselves.

A Flash Git with Snazzung 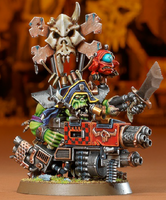 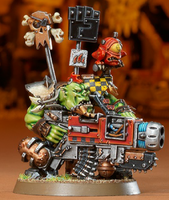 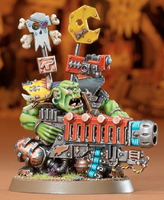 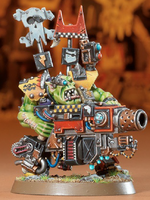 Another Flash Git with armour, Snazzgun and Boss Pole 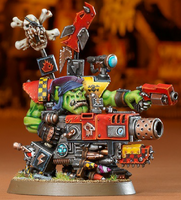 A Flash Git with a bunch of Snazzguns

Flash Gitz on the battlefield 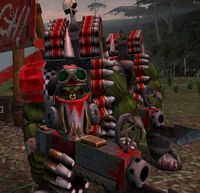 Flash Giltz of the Evil Sunz during the Dark Crusade
Add a photo to this gallery
Retrieved from "https://warhammer40k.fandom.com/wiki/Flash_Gitz?oldid=288497"
Community content is available under CC-BY-SA unless otherwise noted.