A Flamestorm Cannon is a colossal flame projector that sends billowing tides of burning Promethium into the thick of the foe. Cover is no defence against its wrath, and only the thickest armour can hope to offer any protection. These deadly Heavy Flamer weapons are most commonly found mounted on Land Raider Redeemers in lieu of the usual Hurricane Bolter sponsons. Combined with the Redeemer's sophisticated targeting systems, Flamestorm Cannons are able to purge even a well-defended bunker complex in seconds. These massive flame-based weapons also enable Redeemers to be highly effective against infantry during grueling and dangerous urban combat. A Land Raider Redeemer can use its Flamestorm Cannons to burn enemy infantry out of their hiding spots in shattered buildings, mazes of debris, and rockcrete rubble. It is said the flames of the Redeemer are hot enough to liquefy plasteel and even the Ceramite of Space Marine Power Armour. For this reason, the Land Raider Redeemer is known as the Firewyrm by the brethren of the Space Wolves; referring to an ancient beast of Fenrisian legend that is said to have harboured the fires of the sun in its gullet.

Another notable vehicle that utilizes this deadly technology is the Baal Predator, a known specialised variant of the Predator design used only by the Blood Angels Space Marine Chapter and their Successor Chapters. It has been in service with the Chapter since the earliest days of the Great Crusade, when the Blood Angels seized its Standard Template Construct from a ruined archeotech vault. In a move that was riven with controversy even then, the victorious Blood Angels did not hand the template over to the Adeptus Mechanicus despite the dark threats directed at them, bringing it back to their Chapter homeworld of Baal. A Baal Predator equipped with a turret-mounted Flamestorm Cannon is a tried and tested method of clearing bunkers and barricades, whilst the addition of sponsons to the basic chassis can massively reinforce the basic firepower.

However, the Deimos Predator Infernus is an even older variant of the Predator design that is designed to mount a Flamestorm Cannon as its primary turret weapon, although this vehicle is no longer manufactured on a large scale in the 41st Millenium; those few that still exist are revered as priceless relics of a long-forgotten past and as symbols of a Chapter's ancient heritage. 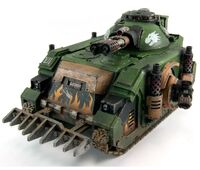 A Deimos Predator Infernus armed with a turret-mounted Flamestorm Cannon
Add a photo to this gallery
Retrieved from "https://warhammer40k.fandom.com/wiki/Flamestorm_Cannon?oldid=293235"
Community content is available under CC-BY-SA unless otherwise noted.