"By bolter shell, flamer burst and melta blast, the mutant, the heretic and the traitor alike are cleansed of their sin of existence. So has it been for five millennia, so shall it be unto the end of time."

Flamers, also known as "Flame Guns", are Flamer Weapons that come in a wide variety of designs and patterns, but all are ideal for flushing out enemies in cover and putting groups of foes to the torch with projected flame.

The two most common variants of Flamers either have a detachable fuel canister under the barrel, or a hose connecting to a backpack canister.

Flamers are most commonly used by Imperial assault forces such as Space Marine Assault Squads, though xenos races such as the Eldar, Orks and the Tau are also known to make use of similar weapons.

Flamer Weapons project fire upon their foes and generally use a fuel referred to as Promethium, though it can also be a home-made concoction or other chemical brew depending on the local technology level. Most forms of Promethium are mono-propellant fuels that ignite via a smaller pilot flame at the tip of the barrel, though some Flamers use binary hypergolic fuels that ignite on contact with one another.

Once produced, the intense jet that spurts from the barrel creates a torrent of liquid fire, which spreads out in an inferno that burns even underwater, leaving enemies hard-pressed to put out the fire.

An example of an Ork Burna with Tank 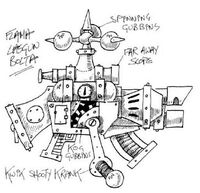