The Firestorm is an anti-air variant of the Craftworld Aeldari's Falcon grav-tank. Utilised as the Aeldari's standard land-based anti-aircraft defence vehicle, the Firestorm mounts a complex triple-barrelled array of Scatter Lasers in a single-seater turret that fills the sky with streaking laser bolts above an Aeldari grav-tank formation.

Highly accurate and capable of sustained bursts, the Firestorm is also a potent anti-infantry weapon, particularly effective when used against hordes such as Ork warbands and Tyranid swarms.

The Firestorm is also armed with a hull-mounted, twin-linked Shuriken Catapult and/or a Shuriken Cannon, and can be further equipped with Vectored Engines, Star Engines, Holo-Fields and Spirit Stones.

With a crew of two, the Firestorm retains its troop transport capacity and can assist Aeldari attacks by delivering a squad of Aspect Warriors to the battlefield before withdrawing to its usual anti-aircraft role. 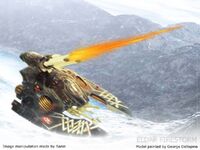 A Firestorm grav-tank of Craftworld Ulthwé firing its triple-barreled array of Scatter Lasers at incoming enemy aircraft.
Add a photo to this gallery
Retrieved from "https://warhammer40k.fandom.com/wiki/Firestorm?oldid=357016"
Community content is available under CC-BY-SA unless otherwise noted.