The Firedrakes are those elite Astartes of the Salamanders Space Marine Chapter's 1st Company, chosen not simply for their martial skill, but also because of their mental resilience, discipline and self-sacrifice. Created during the Great Crusade by their Primarch Vulkan, the Firedrakes were so-named for the greatest of the salamander saurids said to originate beneath the stones of Mount Deathfire. They were the finest and most experienced warriors of the XVIIIth Legion. To be afforded this exalted status, mere skill-at-arms was not enough alone, and the warrior would have to have been proven of faultless bravery and just as importantly, faultless self-control. Amongst these, the greatest formed the Pyre Guard; the Primarch's own loyal retainers. The Firedrakes were present during the tragic Drop Site Massacre on Istvaan V, where the Salamanders Legion, alongside the Raven Guard and the Iron Hands, were all but annihilated. Through their tenacity, sheer determination and extraordinary valour, some of these elite warriors managed to survive the slaughter committed against them by the Traitor Legions. These surviving Firedrake Legionaries would live to fight on for the remainder of the Horus Heresy, and help to hunt down the remnants of the Traitor Legions following their defeat after the Battle of Terra during the subsequent Great Scouring. Following the sundering of the Space Marine Legions into smaller autonomous units known as Chapters, and the subsequent Second Founding, the Firedrakes also managed to survive, for Vulkan made certain that their legacy was maintained.

The elite of the Salamanders Legion were those Legionaries known as the Firedrakes, veterans chosen not simply for their martial skill, but also because of their mental resilience and capacity for discipline and self-sacrifice; for these were values the Promethean Cult holds in high esteem. Tried and tempered in the flames of war, just as a blade was tempered in the flames of the forge, the Firedrakes were indefatigable and relentless, possessing a singular focus in battle which bordered on the preternatural and legendary resilience; a matter as much to do with their phenomenal willpower as their superhuman physiology or superlatively fashioned arms and armour. Such was the wisdom of Vulkan and the traditions of the Legion that many of the Firedrakes could be found fulfilling numerous roles throughout the ranks, rather than concentrated into elitist cadres as may be found in other Legions; the better to serve as exemplars, champions and protectors. Exceptions to this practice did exist, however, such as the Pyre Guard who served as their Primarch's praetorians and advisors, and warrior bands of Firedrakes, most commonly clad in exquisitely crafted Terminator Armour, who were formed to act as shock troops and line breakers for the Legion in the most deadly battles it undertook.

In the modern 41st Millennium, the Salamanders Chapter's powerful and formidably equipped 1st Company, the Firedrakes are still chosen from the Salamander's greatest warriors. The bellicose reputation of the Firedrakes is legendary, even among their fellow Space Marine Chapters, and stories of their might and valour are recorded in scores of sources, from the heroic sagas of the Space Wolves to the labyrinthine texts of the Red Talons' Techno-Cant Strife Chronicles. In addition to providing the Chapter with a veteran core of elite warriors, the Firedrakes also serve as garrison and guardians of the Salamander's foreboding fortress-monastery on Nocturne's giant moon, Prometheus. This battle-station, whose foundations are sunk deep into the moon's surface, as well as serving as the Chapter's armoury, Apothecarion and chief reliquary, is rumoured to also house in its deepest vaults hidden forges and workshops whose sophistication (although not scale) are said to be the equal of any but those found on great Mars, throne world of the Adeptus Mechanicus, itself.

Chapter Command and the 1st Company (The Firedrakes)

The Firedrakes, of which Chapter Master Tu'Shan is the Captain as well as the Regent of Prometheus, are barracked on Prometheus along with the Chapter Master himself. These venerable warriors are almost a breed apart from their fellow Salamanders; the transition they have made to the vaunted ranks of the 1st Company has changed them in myriad ways as they have fully embraced the full evolution of their genetic encoding. Unlike their fellow Battle-Brothers, the Firedrakes are seldom seen on the surface of Nocturne where the other Salamanders readily cohabit with the human populace, albeit often as part of a solitary lifestyle. Their rites are ancient and clandestine, conducted by the Chapter Master himself. Only those who have undergone the most heinous of trials and endured hardship beyond imagining could ever hope to aspire to become a Firedrake. 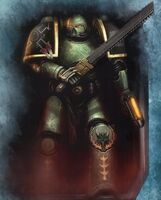 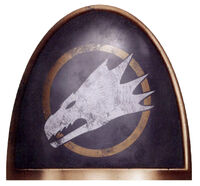 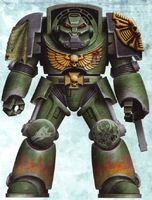 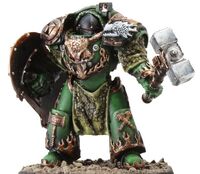 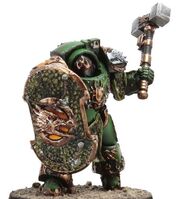 A Pre-Heresy era Firedrakes squad charges into battle
Add a photo to this gallery
Retrieved from "https://warhammer40k.fandom.com/wiki/Firedrake?oldid=293173"
Community content is available under CC-BY-SA unless otherwise noted.