The Fire Raptor, also known as the Fire Raptor Gunship, is a specialised variant of the Storm Eagle gunship and was first used by the Space Marine Legions during the Great Crusade in the late 30th Millennium.

The Fire Raptor replaces the storage capacity of the Storm Eagle with greater ammunition stowage in order to feed the voracious appetite of its numerous weapon systems. The Fire Raptor is usually deployed as heavy support for landing Astartes transports, such as the Thunderhawk, and during Drop Pod assaults.

The Fire Raptor is no longer a common sight within the armouries of the Adeptus Astartes and has largely vanished from the machine canon of the Adeptus Mechanicus for many thousands of standard years.

In the late 41st Millennium the Fire Raptor is slowly being fielded in increasing numbers across countless war zones, suggesting that an as-yet unidentified Adeptus Mechanicus Forge World or Space Marine Chapter Forge has come into possession of a complete Standard Template Construct (STC) imprint for the aircraft.

A small number of far older Fire Raptors, some dating back to the time of the Great Crusade, are known to exist within the armouries of a very small number of Chapters, precious relics of that lost age of glory that was so cruelly curtailed when the galaxy was consumed by the raging fires of the Horus Heresy. These aircraft are only ever used during the most dire of circumstances, as they are true relics and are greatly revered by their Chapter.

Only the sanctioned blessings of a senior officer of the Chapter, such as an Interrogator-Chaplain, Reclusiarch, Master of the Forge, or a Rune Priest can give the order to endanger one of these ancient relics. The Fire Raptor is also found in small numbers within the armouries of the Traitor Legions and Renegade Space Marine Chapters, some as relics from the Horus Heresy, and others captured or scavenged from the battlefield. Many times these ancient vehicles will remain hidden away within a Chaos Space Marine warband's armoury until a Warpsmith allows it to be used in combat.

The Fire Raptor carries a formidable range of heavy weaponry, most destructive of which is its nose-mounted twin-linked Avenger Bolt Cannons. The craft is also armed with two waist-mounted ball turrets, each manually operated by a Space Marine gunner, allowing them to engage targets independently of the vehicle’s main weapons.

These weapons can include quad-linked Heavy Bolters, twin-linked Autocannons, or, if the Fire Raptor comes from the dark armouries of the Chaos Space Marines, it may be armed with a Reaper Battery. The aircraft is also armed with four wing-mounted Hellstrike Missiles, or if it belongs to the Blood Angels Chapter, it can be armed with a Revelation-class Warhead Battery.

The Fire Raptor is also equipped with a Machine Spirit and Extra Armour Plating.

A Chaos Fire Raptor can have its Machine Spirit replaced with an enslaved Warp Daemon.

All Fire Raptors can be outfitted with Armoured Ceramite Plating for extra protection from enemy fire.

A standard Fire Raptor Gunship is armed and equipped with:

A Fire Raptor Gunship may replace its 2 wing-mounted twin-linked Hellstrike Launchers with the following:

During the Great Crusade and Horus Heresy the Fire Raptor Gunships of the Legiones Astartes featured different weapon loadout options than those still found during the 41st Millennium.

A standard Legion Fire Raptor Gunship is armed and equipped with:

A Legion Fire Raptor Gunship may replace its 2 fuselage-mounted twin-linked Quad Heavy Bolters with the following:

A Legion Fire Raptor Gunship may replace its 4 wing-mounted Tempest Rockets with the following:

The Fire Raptor Gunship is known to have at least one variant:

The Fire Raptor is far less often seen in the service of the Chaos Space Marines than the Storm Eagle, but they are likely to be the veterans of millennia of constant bloodshed.

It is not known if any Dark Mechanicum Hell-Forges maintain the capacity to construct new Fire Raptors, but tech-savants in the service of the Inquisition consider it likely that the Dark Magi have developed or retained the knowledge to maintain and repair those Fire Raptors that the Traitor Legions had in their possession at the close of the Horus Heresy.

Heretic Astartes warbands are most often seen to deploy their precious Fire Raptors in support of other assault craft and, as such, their appearance invariably heralds doom and bloodshed.

Even more so than the Chaos Storm Eagle, the Chaos Fire Raptor is a machine steeped in evil. In many cases, its pilots are entirely subsumed into the machine as a result of Chaos mutations so that little more than a mass of pulsing bio-mechanical cabling is visible through the cockpit canopy.

The pilots and the two ball-turret gunners are truly one with their machines, operating as voracious predators that take fell delight in hunting down and exterminating the weak things that scuttle across the ground beneath them.

A Blood Angels Legion Fire Raptor gunship of the 121st Company; note that this level of adornment is typical of the IX Legion, which in other Legions might only be applied to a vehicle in the personal service of a high-ranking officer.

A Chaos Fire Raptor of the Flawless Host warband. The wreckage of this vehicle was recovered during the combined Flawless Host and Night Lords attack on the Agri-World of Euthenia XX, 310.M41. 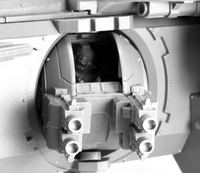 The Fire Raptor's hull-mounted ball turret, armed with a Quad Heavy Bolter; note that the armoured viewport is open 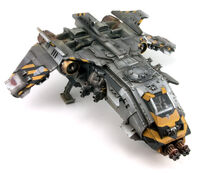 A Fire Raptor Gunship of the Iron Warriors Legion.

A Fire Raptor Gunship of the Sons of Horus Legion.

A Fire Raptor Gunship of the Sons of Horus Legion in flight. 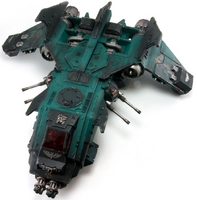 A Fire Raptor Gunship of the Sons of Horus Legion, front dorsal view. 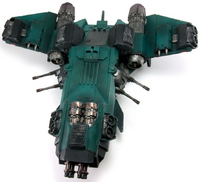 A Fire Raptor Gunship of the Sons of Horus Legion, ventral view.

A pict-capture of a Fire Raptor Gunship during flight operations.

A pict-capture of a Fire Raptor Gunship during combat.
Español
Community content is available under CC-BY-SA unless otherwise noted.
Advertisement