"Ours is not to judge His mind or purposes, for as the hand that turns the hourglass is our Emperor, it is according to His will that the grains of our lives are spent."

The Fire Angels is a Loyalist Space Marine Chapter created during the 25th Founding of the 40th Millennium from the gene-seed of the Ultramarines.

The Fire Angels are best remembered in Imperial records for the role they played in the recent Badab War, a rebellion by several Space Marine Chapters against the Imperium of Man.

Instead, they look forward, carving their own legends in the annals of the Imperium's history. Though only a few standard centuries old, the Chapter has already won many notable victories and taken part in numerous campaigns and Imperial Crusades.

The Fire Angels' origins lie in the late 40th Millennium when they were created during the 25th Founding by the order of the High Lords of Terra. At their Founding, the Fire Angels were granted fief over the strategically important Hive World of Lorin Alpha located in the western half of the Segmentum Solar.

These Astartes do not specifically name their ancestral Chapter, but their gene-seed was sourced from Ultramarines stock, whilst their initial command and training structure was composed of honoured warriors drawn from several Ultramarines Successor Chapters.

Their initiates were drawn from a mixture of Lorin Alpha's military caste who served in the Planetary Defence Force and the violent kill-gangs of the world's sub-hive networks. Initiates are chosen through a thrice-annual process of trial by combat, fear and endurance known as the "Test of Fire".

The Chapter's Master of Recruits conducts these series of bloody tournaments and they are carried out under the supervision of the Fire Angels' Chaplains.

Despite a history that spans less than 2,000 standard years, the Fire Angels have established themselves as a rising star among the more recently founded Chapters of the Adeptus Astartes. Honourable to their allies and implacable to their foes, this Chapter's valiant record may yet see them eclipse Chapters of more ancient provenance and heritage in time.

This Chapter is also unusually active and demonstrative in its faith in the Imperial Cult for Astartes, which has won it political support from within the Ecclesiarchy and allies amongst the cardinals solar. As a result, the Fire Angels have fought successfully alongside the Adeptus Sororitas and in numerous Wars of Faith since their inception.

Their aid is often times actively sought by the Holy Synod of the Adeptus Ministorum as well as the Ordo Hereticus of the Inquisition. Their detractors from some fellow Astartes Chapters view this close relationship with the Imperial church as unseemly and potentially compromising to the historic independence of the Space Marines, who have never deified the Emperor or seen the primarchs as saints.

For the most part, the Fire Angels is considered a Codex Astartes-compliant Chapter, especially in regards to its interpretation of the text as a military treatise, which is also used as a military guide in its homeworld's aristocratic military traditions.

Due to this Chapter's relative youth compared to more venerable Astartes Chapters, the Fire Angels have come to rely on easily replicable Imperial technology due to their lack of invaluable war-relics. The Fire Angels make extensive use of basic Codex pattern gear and vehicles such as the Rhino and Predator, while the majority of their 1st Company is fielded as Sternguard Squads.

While they do possess examples of Terminator Armour, Land Raiders and Dreadnoughts they remain relatively few in number.

This venerable equipment, which was provided to them at their Founding from several different Ultramarines Successors Chapters, is held in high regard, but due to their limited number their use is seldom a focus of the Chapter's battle strategy save during the direst emergencies.

Shaped by their earliest trials in combat, the Fire Angels have developed a predilection for mobile mechanised deployments over the use of Drop Pod assaults or infiltration where practical. This tactic is fed by the ability of the ancient manufactoria on their homeworld to turn out the venerable armoured vehicle pattern chassis and the needed variant hulls and spare equipment as the Chapter's needs demand.

As a result, the Fire Angels' Armoury contains a larger number of Predators, Whirlwinds and Vindicator siege tanks than that of more established Chapters. Compared to other Astartes, discipline and their holy duty to the divine God-Emperor are higher virtues for the Fire Angels than the pursuit of personal glory.

The Chapter relies on proven strategic doctrines from which they seldom deviate save in unusual circumstances. For example, they tend to regularly arm their Tactical Squads with Heavy Bolters for fire support and Melta Weapons for close-range anti-armour capabilities, while Flamers see extensive use by their close combat formations as the preferred anti-personnel weapon.

One of the Fire Angels' favoured martial traditions is their use of the sword in numerous forms not only as an adaptable close-combat weapon, but also as a symbol of rank and spiritual strength within the Chapter. Each Fire Angels' battle-brother considers his own blade to be the incarnate focus for his personal honour and prayer to the Emperor of Mankind.

The Fire Angels are notably conservative in their outlook and nature, adhering closely to the Codex Astartes. This is perhaps inevitable in such a young Chapter, which has yet to develop the idiosyncrasies of one that has fought for many standard millennia.

The Chapter's battle-brothers train for all aspects of warfare, but focus on those considered the core of the Space Marine way of war. The Chapter lacks large numbers of the more specialised Astartes war machines and wargear and makes extensive use of Rhino armoured transports as well as the many vehicles based on this venerable pattern.

The Fire Angels view themselves as part of the wider Imperium's web of power, and so have gained a reputation among a number of Imperial commanders and generals as somewhat easier to work with than many other Astartes, who usually ferociously guard their political independence and favoured status among the Emperor's servants, particularly from encroachment by the Ecclesiarchy or the Inquisition.

While it is known that the Fire Angels were founded using the gene-seed stocks of the Ultramarines, the Chapter maintains few of the traditions of its progenitor. There is one aspect of the Fire Angels that sets them apart from other Chapters however, and that is the manner in which they honour the Emperor. While the Imperial Creed preaches that the Emperor is a god, the majority of Space Marine Chapters have their own, unique Chapter Cults, most of which regard Him as a man, albeit the most potent and extraordinary ever to have lived, an individual worthy of veneration and emulation, though not worship.

Uncommonly amongst the Adeptus Astartes, the Fire Angels' Chapter Cult adheres closely to the dictates of the Imperial Creed, sharing many of its teachings and beliefs, including the divinity of the God-Emperor. As a result, the Chapter has close ties with various bodies within the Ecclesiarchy and has even fought alongside the battle-sisters of the Adepta Sororitas.

Battle-brothers of the Fire Angels have received numerous citations and honours from the lords of the Adeptus Ministorum, something that very few other Chapters would accept or acknowledge. The Chapter's warriors are often seen bearing various icons of the Imperial Creed upon their armour as they fight the enemies of the Emperor.

It is worthy of note that the Fire Angels believe that despite being a Successor Chapter drawn from the gene-seed of the Ultramarines Legion, they do not consider Roboute Guilliman, their primarch, to be anything other than an exceptional warrior.

To this Chapter only the Emperor of Mankind and His saints are divine, and to proclaim or venerate otherwise is considered to be a form of idolatry.

Their Chapter iconography is prominently displayed on both shoulder plates.

A black Low Gothic numeral can be stenciled on the centre of the squad specialty symbol, which indicates squad number.

A black Low Gothic numeral is stenciled on the centre of the right knee guard, further identifying the company number.

The Fire Angels' Chapter badge is a red crosslet, which adorns both shoulder plates, centred on a field of silver. 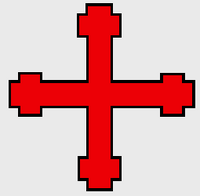 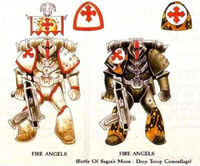 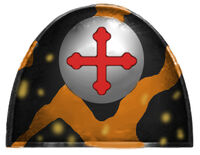 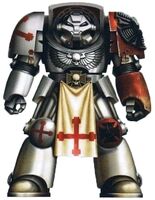 A Relic Whirlwind Scorpius of the Fire Angels Chapter, ca. 500.M37, unknown war zone. As the Fire Angels were not founded until M40, this vehicle must have belonged to an unrecorded predecessor Chapter which bore the same livery.