The Fighta-Bommer (pl. Fighta-Bommerz) is the Orks' primary tactical and strategic bombing aircraft. The Fighta-Bommer is capable of both void and atmospheric flight. It is used to bomb enemy bases and to assault enemy starships, or even in some cases to dogfight with enemy aircraft.

Constructed with typical Orkish crudeness, these rickety, gravity-defying contraptions are often surprisingly effective and dangerous to friend and foe alike, as is common with most Ork technology.

Fighta-Bommerz are often deployed as air support during large Ork planetary invasions, or to serve as point defence for Ork starships.

Fighta-Bommerz are created by the few Meks who are interested in aircraft. As with all Ork vehicles, Fighta-Bommerz are kit-bashed affairs that usually defy the laws of aerodynamics, and fly despite their ungainly, brutish construction.

Luckily for the other intelligent species of the galaxy, an Ork's natural instinct makes it wary of flying, for Orks believe the best fighting is always done up close and personal, and strapping oneself into a flying machine means missing out on all the fun on the ground.

However, Speed Freeks manage to see past this hampering fact, and understand that nothing goes faster, makes more noise and is equipped with more guns and bombs than a good airplane.

An Ork Fighta-Bommer is the most commonly encountered Orkish aircraft, although the instinctive and haphazard construction skills of the Mekboyz prevent any form of standardisation. Most Fighta-Bommerz are made of a fat body sporting many Gunz and a bomb bay to transport huge bombs or crude missiles, a pair of wings, large engines and little else.

The whole contraption is more often than not painted red due to the Orkish belief that "Da red un' goes fasta!", and that it actually able to fly is as much a tribute to the Orks latent psychic power than to the Mek's skill.

On the field of battle, Fighta-Bommerz can be used in multiple roles, be it aerial support, interdiction or raiding, both in atmosphere and in space. Their efficiency as bomber and support craft is much higher than as dogfighter however: while their many Gunz allow them to throw a copious amount of firepower at their targets, the less than aerodynamic Orkish constructions often have poor maneuverability, which severely hampers them in a dogfight.

A one-on-one duel between a Fighta-Bommer and an Imperial Navy, T'au Air Caste or Aeldari interceptor is utterly uneven, hence the Orks tend to congregate in bands of aircrafts called "skwadronz" (A bastardisation of the Low Gothic word "squadron") to support each other and overwhelm any opponent through sheer numbers.

Additionally, as long as the Meks building and maintaining the "skwadron"'s craft survive, they can repair and/or build new planes from scratch on a much higher rate than other races, and often the Orks aerial opponents have been simply ground away through attrition despite impressive kill/loss ratios of more than ten to one.

The Mek will normally start out trying to build a specific type of aircraft but will soon become indecisive and hammer onto the emerging airframe as many guns, engines and other devices of questionable origin and use as possible.

The standard Fighta-Bommer is armed with three Big Shootas, and carries ordnance such as the Supa-Rokkit, and the inventive Grot Bomb.

While a surprisingly good dog-fighter, Fighta-Bommerz rely on their heavy armament and reinforced armour plating to make up for a lack of speed and maneuverability when compared to other aircraft.

The uses for the Ork Fighta-Bommer are limited. While generally more durable than most other intelligent species' airborne vehicles, the Ork aircraft is easily outclassed by similar craft flown by the Imperial Navy, the T'au Air Caste, or the Asuryani fleets.

The Greenskins' Evil Sunz klan maintains the most appreciation for the aircraft among the various Ork tribes due to its blistering speed.

The most famous Fighta-Bommer is the dreaded "Vulcha", one of the oldest and longest serving of its kind. This is the personal aircraft of the infamous Zagstruk, the Warboss of the elite "Vulcha Skwadron." These Stormboyz used their aging Fighta-Bommerz to make deep strikes into enemy positions by recklessly jumping from the Vulcha's bomb bays and firing their Ork Jump Packs at the last minute.

The tactical advantages of this maneuver (barring any Rokkit-related mishaps) may seem fairly obvious, but they haven't been adopted by other Stormboy units, most likely because of the difficulty of retaining Meks with the skill needed to build a functioning Fighta-Bommer

Providing a standard set of specifications for these haphazard Orkish contraptions is utterly impossible for the Adeptus Mechanicus or the Inquisition's Ordo Xenos, hence they provide Imperial pilots with the following general specifications: Fighta-Bommerz have an excellent maximum speed, but poor maneuvrability.

Orkish aircraft have shown to be quite durable, requiring a lot of punishment before the pilot will ultimately lose control and the aircraft will explode or crash.

A Fighta-Bommer normally carries only three but will sport up to five Big Shootas, often twin-linked, and an ordnance bay that can carry a half dozen large bombs or crude rockets. In some instances, the large bombs are guided manually to their target by a suicidal Grot and are thus known as Grot Bomms.

Due to the fact that Ork vehicles are never built according to standardised specifications, the Ordo Xenos Departmento Analyticus has been unable to provide standardised technical specifications for Imperial armed forces about the Fighta-Bommer.

The following represents in many ways a "best-guess" of the specifications for a typical Fighta-Bommer, if such a thing can be said to exist.

The general rule about Ork aircraft and vehicles is this -- they are always far more deadly than their almost comical appearance would suggest. 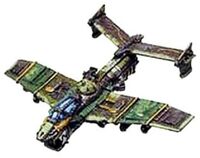 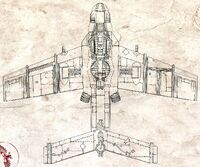 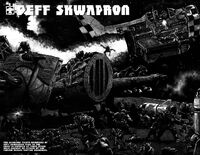 The Fighta-Bommerz of Deff Skwadron lift off to face the foe. 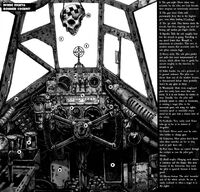 A Grot Bomm, the Fighta-Bommer's most precise and destructive weapon.
Español
Community content is available under CC-BY-SA unless otherwise noted.
Advertisement