Fellbane is a revered artefact of the Dark Angels Space Marine Chapter, and in times of need, Lazarus, the current company master of the Dark Angels' 5th Company, wields this famous master-crafted power sword.

This sword is one of a quadrumvirate of legendary swords collectively known as the Heavenfall Blades. These formidable weapons are only carried by the highest-ranking members of the Inner Circle of the Dark Angels.

The Chapter's lore states that these blades were forged from the core of a meteorite that struck their mobile fortress-monastery, known as the The Rock, in orbit around the Feral World of Al Baradad.

The mightiest of these blades is the Sword of Secrets, carried by the supreme grand master of the Chapter, and the current wielder of that sword is Azrael.

It is also said that a small portion of this meteoric substance was despatched to each of the Dark Angels' Successor Chapters, so that the senior members of the Unforgiven's own Inner Circles would also bear the same heritage forged in steel as those borne by the Masters of the Dark Angels.

Sometime in the late 41st Millennium, Master Zadakiel, the former Company Master of the Dark Angels' 5th Company, led his company to the world of Stern's Remembrance where they discovered the notorious Fallen Angel Attias the Untamed, who then attempted to warn his erstwhile brothers that it was all an elaborate trap, and that they should take their leave.

The Dark Angels took Attias into custody and attempted to take their leave, but as they made their way back to their Thunderhawks the trap was sprung, as a massive Drop Pod assault was launched by the Chaos warband known as the Crimson Slaughter while their allied Chaos Cultists surrounded the outnumbered Dark Angels.

In the ensuing battle, the Dark Angels reluctantly freed Attias, allowing him to fight by their side in order to survive the Heretic Astartes' onslaught. As Zadakiel was about to board the hovering gunship, the Helbrute Mortis Metalikus appeared. Zadakiel drew the Heavenfall Blade called Fellbane and started to do battle with the beast.

Seeing he could not escape his fate and that the Helbrute was aiming his Multi-Melta at the Thunderhawk, Zadakiel threw Fellbane into the Thunderhawk and let go, falling to his death.

His position as Master of the 5th Company was then passed on to the company's senior-most surviving Astartes, Brother-Sergeant Balthasar.

Years later, when Balthsar himself was slain in the period immediately following the opening of the Great Rift and replaced as Master of the 5th Company by Master Lazarus, the first Dark Angel Firstborn Space Marine to cross the Rubicon Primaris and ascend to become a Primaris Marine, Fellbane was passed on to him. 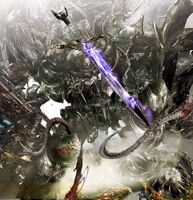 Master Balthasar wielding Fellbane in battle against a Daemon of Chaos.

Master Balthasar wielding Fellbane in battle.
Add a photo to this gallery
Retrieved from "https://warhammer40k.fandom.com/wiki/Fellbane?oldid=373713"
Community content is available under CC-BY-SA unless otherwise noted.