"Without mercy or moral feeling, the Farseer’s consciousness stands upon the edge of spiritual destruction."

A Farseer is the most potent and respected form of Craftworld Aeldari psyker or Seer. A Farseer was once a Warlock, but has now become lost upon the Path of the Seer forever in the same way as the Exarchs are wed eternally to the Path of the Warrior.

A council of the most powerful Farseers generally governs a craftworld. Farseers possess a wide diversity of psychic specialities with divination and precognition being the most common skill.

They are most often known for using their vast psychic powers to see the possibilities of the future so that they can manipulate events to better ensure the survival of the Aeldari species in the wake of the Fall.

There are two other specialised types of Asuryani Seers, Warlocks and Spiritseers. Warlocks are those Seers who now tread the Path of the Seer but have not been lost to it, and have also previously travelled the Path of the Warrior and served a time as an Aspect Warrior without also losing themselves to that Path and becoming an Exarch.

Warlocks primarily use their powers to assist other Asuryani warriors in battle, shielding them from harm and attacking their enemies. Spiritseers are those Seers who specialise in communication with the dead; unsurprisingly they are most prevalent within Iyanden and sometimes lead squads of Wraithguard in combat.

This is done through the casting of Seer Stones, fragments of Wraithbone and other psycho-sensitive materials that react to the convoluted, probabilistic skeins of space-time. By reading the throw of these stones, the Seers can often determine what will be the most beneficial course of action, though it is rare that they can discern true results any great distance into the future.

On occasion a powerful Seer will receive a portent of some calamitous event, and be able to steer the Craftworld Aeldari away from disaster and doom. With so few Aeldari remaining, the Seers attempt to preserve every Aeldari life possible.

Farseers are amongst the most powerful of Seers and probably represent some of the most potent psykers in the entire galaxy. Every craftworld has a handful of Farseers amongst their populace who usually make up that craftworld's guiding council.

Much of a Farseer's time is spent in a trance-like state where their spirit roams at will throughout the wraithbone of the craftworld where they direct the psychic-energy flow throughout the entire world-ship.

As such, a Farseer is not normally in a waking state, though their visionary skills allow them to direct their fellow Asuryani in avoiding those dangers that can fall upon the craftworlds. This is accomplished by way of exploring potential future paths that may lie ahead and making a determination about which paths need to be altered to produce a better future outcome.

A Farseer's duties mean that they do not usually engage in combat duties despite their previous experiences and enormous psychic potential for destruction. Yet in times of desperate need, Farseers can return to the battlefield where they use their incomparable psychic powers to aid their species in combat.

Craftworld Aeldari armies are sometimes accompanied by a single Farseer which is due to the fact that more cannot be spared as they are tasked with guiding the future of their craftworld. A Farseer's powers are generally more potent than those of a Warlock, but they rarely engage directly in psychic combat, preferring to use their precognitive abilities to guide their forces in pursuing those tactics and strategems that will prove most effective in defeating the foe while minimising the Asuryani's own casualties.

However, this ability to see the future and react upon what is seen has caused the Craftworld Aeldari to be distrusted by other races. Occasionally, a Seer will see that by attacking a certain world, fleet or base, Aeldari lives will be somehow saved from a future event; Asuryani forces will then suddenly attack unannounced, and quickly withdraw as soon as their goal has been accomplished.

This, along with the Aeldari tendency to view all other intelligent species as inferior, has led other peoples of the galaxy to deem them as fickle, aloof and untrustworthy. Also, the most powerful Farseers have even shown the ability to steer future events so that other species fight each other rather than the Aeldari.

One of the greatest examples of this being when the famed Farseer Eldrad Ulthran of Ulthwé (a craftworld which places greater emphasis on the Path of the Seer) secretly facilitated the rise of an obscure Ork warlord named Ghazghkull Mag Uruk Thraka, who would eventually become a significant enemy of the Imperium of Man.

The Farseers lead their people in times of war as well as peace. On the battlefield their powers of precognition allow them to foresee the enemy's attacks and movements and warn their comrades against imminent changes on the field of battle.

Since they are less capable of foreseeing events in such harried conditions, the Warlocks will often serve as officers in battle, leading units of other Asuryani and helping to coordinate the overall battle, as well as to lend heavy fire support utilising their considerable psychic powers.

As Farseers grow older, their minds become so intertwined with the wraithbone core of their craftworld that their physical bodies slowly become ever more dormant. When the time has come they go to the Dome of Crystal Seers that exists within every craftworld and join the crystalline bodies of the Farseers that came before them.

Those of great age typically retreat into the Dome of Crystal Seers where their bodies begin to mutate within this peaceful retreat into a form of psychically-reactive crystal. This transformation is believed to be caused by a Farseer's constant exposure to the chaotic energies of the Warp.

During their gradual process of transmutation, a Farseer takes root amongst the trees of the biodome and eventually turns entirely into a humanoid form composed of crystal. In this state, their spirit is freed into the structure of the craftworld itself where it is preserved forever within the psycho-conductive Wraithbone Infinity Circuit.

This fact sometimes leads to other Asuryani wandering into the Dome of the Crystal Seers in order to see the Farseers of Old, whose bodies are preserved forever amidst the glades of ancient trees rescued from the lost Aeldari homeworlds.

Runes of the Psyker

Asuryani upon the Path of the Seer learn to harness their powers using complex, psychically sensitive wraithbone runes. These act not only as prophetic tools, but also as arcane wards that smoulder and burn out whenever the energies of the Warp flow too strong.

With these runes, Farseers can learn to identify the course of reality that benefits them the most, and steer their people accordingly. On a personal level, their destiny is set in stone -- a peculiar side-effect of the Farseer's obsession with the metaphysical sees their bodily form eventually turn into delicate psychocrystal.

When the transformation is almost complete, the senescent Farseer makes a journey to the Dome of Crystal Seers, joining his predecessors as an inert statue linked to the Infinity Circuit forever. 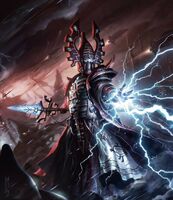 An unknown Farseer protecting its warhost against the enemy with their eldritch powers. 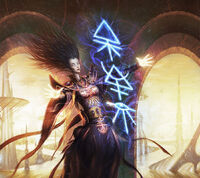