The Falchion Super-Heavy Tank Destroyer, or simply the Falchion, was a super-heavy tank destroyer used by the Space Marine Legions, and in limited numbers by the Imperial Army and Mechanicum, during the time of the Great Crusade and the Horus Heresy in the late 30th and early 31st Millennia. Along with its sister super-heavy tanks, the Fellblade and the Glaive, the Falchion was one of the most powerful and most feared weapons used during this time.

The Falchion Super-Heavy Tank Destroyer was developed long before the outbreak of the Horus Heresy. In these ancient times the Space Marines of the Adeptus Astartes operated very differently than in the 41st Millennium, fighting on an unimaginable scale in wars with tens or even hundreds of thousands of elite warriors deployed who could conquer entire planets in mere days, or even hours. These massive armies of the Legiones Astartes were given the very best technology constructed by the Mechanicum, and one of the greatest of their works of war was the super-heavy tank destroyer known as the Falchion. The Space Marine Legions fought as front-line forces that used massive amounts of overwhelming firepower to achieve their goals, rather than making use of surgical strikes on enemy weak-points as the much smaller Space Marine forces of the present time prefer. As such its prey was not the enemy Titans it would alter see such extensive combat against. As the Great Crusade expanded ever outward, the Expeditionary Fleets encountered a staggering array of foes, some of whome were of a truly gargantuan scale. The formless overlord beings of the Psiom Reach were so massive they could crush entire armies with their bulk, but they were set to ravening flame by the touch of the Ultramarines's Falchions formidable twin-linked Volcano Cannons. When the gravity-defying mountain-fortresses of the Thulos Deeps rejected Compliance, a company of Iron Hands Falchions burned them and their occupants from the skies, scattering all to rubble such that no stone was left standing upon another.

These massive tanks, armed with their massive forward-firing twin-linked Volcano Cannons, were capable of destroying even the most heavily armoured vehicles in short order. Due to the size of these vehicles, the only way they could be safely transported to a planet's surface was by Stormbird gunships or by Mechanicum bulk lifters. These war-machines could even be used as Titan killers, and were widely deployed during the Horus Heresy to fight enemy Titans. It is thought that some Space Marine Legions, such as the Iron Warriors, Ultramarines, and Imperial Fists, made extensive use of the Falchion, while others, like the Night Lords, White Scars, and the Raven Guard, who preferred hit-and-run tactics, may have eschewed their use altogether. During the Horus Heresy these tanks were used by Traitor and Loyalist forces alike.

It is believed by Imperial scholars that after the Astartes Legions were broken down into the smaller, one thousand-man Chapters during the Second Founding, their vehicles were removed from their main armouries and spread amongst their Successor Chapters. Once the Horus Heresy ended the ability to construct Falchions, like so many other great works of human technology and engineering were eventually lost, the remaining Falchions dwindling in supply until eventually only ever being used in the most dire of circumstances. As for the Traitor Legions, after their defeat on Terra many were forced to quickly retreat from Imperial territory, and during the Great Scouring, many of the Traitor Falchions that had not been destroyed in battle were either abandoned or scuttled and in the ten thousand standard years since the Horus Heresy, many of these tanks that had survived amongst the Traitor Legions were lost to Chaotic in-fighting and disrepair. However there exist rumours of some of these machines surviving amongst the armies of the Forces of Chaos, as warped, twisted, and tainted nightmares touched by the foul powers of the Warp and the "blessings" of the Chaos Gods. The Forces of Chaos still make limited use of Falchions and Fellblades that are blessed by Chaos Undivided in the 41st Millennium.

The Falchion was used as a super-heavy tank destroyer, and as such it lacks some of the features of the Fellblade such as a turret-mounted main gun, instead its main weapon is fixed to the vehicle's forward hull and is only capable of slight movements. The Falchion is armed with a full-sized twin-linked Volcano Cannon , a weapon that is usually mounted on Imperial Titans. This is one of the most powerful vehicle-mounted, anti-tank weapons in the Imperium's arsenal and it requires such an investment in resources to construct just a single example that its use was limited to the Legiones Astartes. Even then, the Falchion was so rare that most Legions maintained but a handful, reserved for use against the largest of enemy war machines. The Falchion is also armed with two sets of sponson-mounted Quad-Lascannons, and could be outfitted with Smoke Launchers, Searchlights, an auxiliary drive system, Extra Armour Plating, and a Hunter-Killer Missile Launcher. The vehicle was normally crewed by experienced Legion Serfs, however they could be replaced with superior Astartes crewmen if needed.

The Falchion was first pictured in The Horus Heresy: Collected Visions Artbook and the Horus Heresy Card Game as a Legion heavy tank known as the Mammoth Tank and looked very similar to the Shadowsword. When Forge World began re-imagining the older content for their Horus Heresy line of models the Mammoth was renamed the Falchion, and its armament was changed to differentiate it from the Shadowsword as they were also used by the Astartes Legions. It is unknown if an actual modern Mammoth Tank will ever be created. 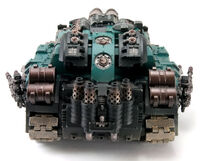 An ancient pict-capture of a Word Bearers Legion Falchion, Eightfold Lance, one of a handful of "Titan-killer" super-heavy tanks deployed to Calth 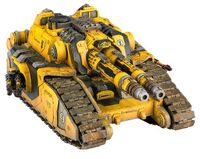 A Falchion of the Imperial Fists Legion, front-side view 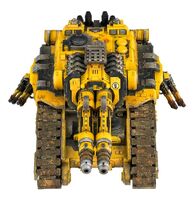 A Falchion of the Imperial Fists Legion, top view

A Falchion of the Imperial Fists Legion, side view
Add a photo to this gallery
Retrieved from "https://warhammer40k.fandom.com/wiki/Falchion?oldid=312132"
Community content is available under CC-BY-SA unless otherwise noted.