"Sisters, let us raise our song to the Golden Throne! 11th Movement, 'We Bless the Sinner as He Burns'. All Exorcists, target heretic Warhound 17 by 12, commence Adagio and engage!"

The Exorcist is the primary long-range support vehicle of the Adepta Sororitas, also known as the Sisters of Battle. Besides the Rhino, the Exorcist is the oldest type of vehicle in service to the Sisterhood, the history of the Exorcist goes back as far as the Age of Apostasy. Some Exorcist tanks in service today originate from that time period, and are heavily venerated and considered sacred by their users. These tanks, of which some are very similar in appearance to the Space Marine Whirlwind missile tank, use ancient technologies that are barely understood by the Adeptus Mechanicus today. Many of these ancient machines have a reputation as being temperamental and difficult, their Machine Spirits requiring constant work and prayer in order to keep them battle-ready.

The Exorcist exists today in two different patterns, the original Prioris Pattern, which originates from the forges of Mars, and the Sanctorum Pattern, which is constructed on Ophelia VII. Due to Mars being the closest Forge World to Terra, and the Emperor Himself, any Prioris Pattern Exorcist originating from there is heavily venerated and each vehicle is regarded as a work of art, as much a symbol of the Emperor as a provider of long-range fire support. While the Sanctorum Pattern is the most common pattern of the Exorcist, it is not held in as high esteem as the original vehicles, which are blessed from the closer divine presence of the Emperor when they were constructed.

The Exorcist is based on the common Rhino chassis design, much like many other vehicles used by the Adepta Sororitas. The vehicle is named after its main weapon, the Exorcist Missile Launcher, the weapon is mounted on top of the tank. The Prioris Pattern of the Exorcist features a very ornate launcher system that resembles a large pipe organ and launches the missiles out of the tops of its long pipes. The Sanctorum Pattern uses a more conventional missile launching system, and is very similar to the Whirlwind Missile Launcher mounted on the Adeptus Astartes Whirlwind tanks. The missiles fired from the Exorcist Missile Launcher are armour-piercing explosives that are capable of annihilating enemy tanks or destroying squads of heavy infantry in a single salvo, assuming the launcher does not malfunction. Though the weapon is potent, to the Sisterhood its primary purpose is to serve as a divine symbol of the power and glory of the Ecclesiarchy and serve as a mobile shrine to the Emperor. Like the Immolator tank also used by the Sister of Battle, the Exorcist belongs to the Adeptus Ministorum's unique arsenal of war-machines. These weapons and vehicles are seen as tools for prosecuting holy wars against heretics and mutants, and it would be inappropriate for the rabble of the Imperial Guard or the deviant Space Marines who worship their Primarchs to use. For these factions to use these most holy of weapons would be to risk tainting the Machine Spirit and would incur the displeasure of the Emperor. Each Exorcist is hand-crafted and unique, and each one may be outfitted with several upgrades, including; Blessed Ammunition, dozer blades, extra armour plating, a Holy Icon, a Hunter-killer Missile Launcher, Laud Hailers, a Pintle-mounted Storm Bolter, a searchlight and smoke launchers.

Users of the Exorcist Missile TankEdit

An Exorcist of the Order of the Bloody Rose

An Exorcist tank belonging to the Order of the Blue Robe 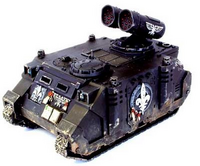 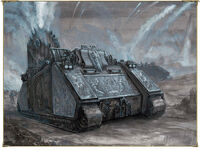 An Exorcist Missile Tank during battle
Add a photo to this gallery
Retrieved from "https://warhammer40k.fandom.com/wiki/Exorcist?oldid=317350"
Community content is available under CC-BY-SA unless otherwise noted.