"Sow the seeds of damnation and I shall reap the souls of the tainted."

The Eversor Temple is possibly the most gruesome of the many temples that train Imperial Assassins for the Officio Assassinorum. The Eversor Assassins specialise in shock and terror tactics, instilling fear of Imperial retribution into the hearts and minds of all who hold positions of power in the Imperium of Man.

Often in the employ of the Imperial Inquisition's Ordo Malleus, Eversor Assassins are used to solve the problem when the indelible taint of Chaos is believed to have spread throughout the ruling elite of an entire Imperial Adepta or planetary government.

Whilst the more overt forces of the Ordo Malleus like the Grey Knights Space Marines may face the daemonic minions of a Chaos Cult or Chaos Space Marine warband on the battlefield, the Eversor will operate behind enemy lines and eradicate the infection at its source.

An Eversor Assassin rarely has just a single target. His mission will be to rip the heart out of the Chaos insurgency, wreaking havoc and destruction. Such brutality ensures that the Heretics are totally cleansed and that no would-be successors may take over. The sheer terror left behind in the wake of an Eversor Assassin's onslaught ensures that none will dare to oppose the will of the Imperium again.

"Fear me, for I am your apocalypse."

The Eversor Clade which evolved into the Eversor Temple can trace its origins back to the time of the Great Crusade in the late 30th Millennium. The Emperor's Regent and closest advisor, Malcador the Sigillite, who served as the first Grand Master of Assassins for the Imperium, first formed the Officio Assassinorum with six other individuals at Mount Vengeance who had sworn to eliminate all enemies of the Emperor by any and all means necessary, including stealth and assassination.

Each of these six individuals became the founder or "Director Primus" of a clade of assassins that actively operated to remove threats to the Great Crusade's success when direct military operations were impractical or too costly. The Eversor Clade was created by Sire Eversor, whose clade became well-known for the brutality with which it carried out its operations.

When the Horus Heresy began, the Grand Master of Assassins ordered that all the clades of the Officio form the first known Execution Force of Assassins drawn from every clade to eliminate the Warmaster Horus before his rebellion and civil war could substantially damage the Imperium.

Among the Assassins who would become a part of this force was the Eversor Clade member known only as "The Garantine" who had been accidentally awakened from stasis at the Eversor facility in the Aktick on Terra. Ultimately, this mission would fail and all of the Assassins involved would be slain.

In 536.M32 the then-Grand Master of Assassins Drakan Vangorich assassinated all of the sitting High Lords of Terra in an event that became known as the Beheading and then fled to an Officio Assassinorum temple. The Space Marines of the Halo Brethren, Imperial Fists and Sable Swords responded to this brazen power grab by launching a raid on the temple, where they battled a force of one hundred Eversor Assassins. Only a single Astartes survived the skill of the Assassins to bring the Emperor's justice to Vangorich.

Another notable incident was the Slaughter of Clan Mackenzie that occurred during an unknown period of Imperial history. The ruling family of Dumroamin VI in Segmentum Ultima was the Clan Mackenzie, an ancient colonial family, led by Grand Duke Fraser Mackenzie.

It became evident that the Clan Mackenzie were financing pirate raids on their neighbours, paying for stolen goods taken from the rival Mining Worlds of Rouan and Nearly-There. An unnamed Eversor Assassin was dispatched to wipe out Grand Duke Mackenzie and all his living relatives during the Grand Hootmamay (a local Heretic festival), which was held every local summer.

The Eversor succeeded in killing all 317 members of the Clan Mackenzie (the youngest being three weeks old, the eldest 142 years of age), although at times the Assassin was forced to resort to various improvised weapons to complete the daunting task, including a silver soup spoon and a butter knife.

During the Taros Campaign in 998.M41, an Imperial campaign to retake the Mining World of Taros in the Segmentum Obscurus from the forces of the T'au, the Imperial forces requested the aid of the Officio Assassinorum through the use of a priority astro-telepathic message after they discovered the location of the T'au Fire Caste's headquarters on the arid planet.

An Assassin of the Eversor Temple was tasked with the mission of assassinating the T'au commander, Shas'O R'myr, to disrupt the Tau command in the campaign. The mission was code-named Operation Deathblow. The Ethereal Aun'Vre who was directing the T'au operations on Taros was also located within the headquarters and his death would be a major blow to the ability of the T'au Fire Warriors to carry out combat operations, although this was a secondary objective.

The Assassin's transport ship Son of Jucha successfully delivered his stasis pod to the Imperial flagship Righteous Blow after evading the blockade erected by the T'au Navy around the Taros System. The Assassin was released onto Taros' surface by a Drop Pod expelled from the flagship.

The Assassin successfully penetrated the T'au's hidden command centre and detonated his suicide Melta-charge, killing himself and the Ethereal as well as destroying the entire command centre.

However, the mission was not an unequivocal success because Shas'O R'myr was already outside leading his bodyguard against the Imperial attack and was not caught in the Assassin's blast.

An Eversor Assassin has undergone a varied regimen of cybernetic and genetic augmentations to transform them into the ultimate killers. Additionally, the Eversor Temple has long made use of a special cocktail of combat enhancement drugs that are designed to instill a psychotic rage in its Assassins and to further enhance their physical capabilities to the point that it strains even their enhanced physiologies.

As a result, one of the first genetic enhancements made to an Eversor Assassin is to strengthen their immune systems beyond the human norm so that they can survive the sheer toxicity of the combat drugs they are constantly infused with.

Unfortunately, these drugs are also usually highly addictive and if the infusions are stopped, the Eversor Assassin will likely die from the agonising withdrawal symptoms. Additionally, the drugs will also dramatically shorten the Assassin's lifespan if he was allowed to remain conscious continually.

To deal with these difficulties, all Eversor Assassins are kept in cryo-suspension at all times between missions, and are only revived once they are needed for their next assignment. Eversor Assassins are kept in cryo-stasis aboard very special, and very secret starships and space stations that are placed all across the Imperium in highly-secure locations and kept on constant alert.

Only when a direct order is received from the High Lords of Terra through the Grand Master of Assassins of the Officio Assassinorum that provides a new assignment for an Eversor Assassin are the Temple's operatives awakened.

Once a mission has been assigned, an Eversor Assassin is transferred from his cryogenic crypt into a specially-designed one-man Drop Pod. The Assassin remains in stasis this entire time, while direct cybernetic neurolinks within the pod feed all of the relevant mission details directly into his neural cortex.

When the Temple's starship has come out of the Warp near the target planet, the Drop Pod's fully-automated systems begin to awaken the Assassin from stasis and to prepare his body with the necessary suite of combat drugs that best fit the mission profile. By the time the Drop Pod reaches the surface of the target world, the Eversor Assassin has fully awoken and been equipped to carry out the operation.

Due to the use of cryo-suspension to keep its Assassins alive, an Eversor Temple Assassin usually has no idea how much time has passed in the galaxy since he or she was last awakened to perform a mission, which could be a few solar decades or even Terran centuries.

For the Assassin, only moments have passed since they completed their last assignment and they emerge completely fresh and entirely focused upon carrying out their next objective, which is the only way to even begin to satiate their raging, psychotic bloodthirst.

In the early days of its existence during the Great Crusade and the Horus Heresy, when it was still known as the Eversor Clade rather than the Eversor Temple, the organisation maintained a major cryogenic iso-storage facility for its Assassins in the frigid Aktick (Arctic) northern polar region of Terra that was located deep beneath the glacial ice.

The Assassins were kept in their frozen dormant state in conduits filled with super-chilled methalon gas. The facility was maintained, as the Eversor starships and space stations are at the present, by members of the Temple's staff known as "technologians."

In many ways an Eversor Assassin has more in common with a living bomb than with a human operative. Rather than taking out a single target like the other Officio Assassins, an Eversor Assassin is usually employed to clear a large number of targets in a short amount of time.

In essence, Eversor Assassins are one-person special forces units. In fact, because of the amount of ability-enhancing drugs running through his or her body, when an Eversor Assassin is brought down and killed in combat, the drugs will react violently to the metabolic onset of death and cause the Eversor's corpse to explode, providing a final opportunity for the Assassin to kill the enemies of the Emperor.

In order to act so efficiently, an Eversor Assassin is fielded with a wide variety of weapons and combat tools, including a weapon known as an Executioner Pistol that can fire neuro-toxin-coated needles as well as explosive bolts like a Bolt Pistol, powerful Melta-bombs for destroying tanks and heavy doors, and a potent chemical cocktail of drugs that gives the Assassin incredible reflexes, enhanced durability and survivability and a single-minded rage to kill his targets.

Jaku Dihardis, an Assassin of the Eversor Clade

Tarik Gortsucker, an Imperial Assassin of the Eversor Clade 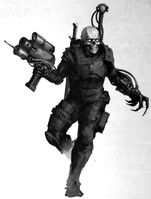 An Eversor Assassin on the hunt