An Eternity Gate is the arcane technology that is capable of opening a dark portal and transporting Necron troops to the battlefield from elsewhere in the galaxy. An Eternity Gate is mounted on the front face of a Necron Monolith or built into the face of a Tomb Ziggurat that makes up part of a larger Necron Tomb Citadel. Its shimmering energy field is nothing less than a captive wormhole through space-time bound into the very heart of the Monolith. With a simple mental command, the Monolith’s crew or the Tomb World's command algorithms can transform the Eternity Gate into a portal of exile, and those that fail to resist its pull are sucked out of reality entirely, banished forever to an extra-dimensional prison from which there can be no escape. Alternatively, the Necrons can use the Eternity Gate as a form of dimensional corridor, pulling squads of Necron troops from elsewhere on the battlefield, orbiting starships or even far-distant Tomb Worlds and deploying them to the Monolith’s location. It can also significantly boost the regenerative processes of the Necron squads that move through its transportation matrix. The Eternity Gate is largely the reason that the Monolith is known as a harbinger of disaster to the foes of the Necrons, for where a Monolith teleports onto a planet’s surface, an invading Necron army is rarely far behind... 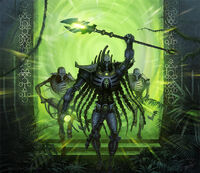 A Necron Lord leads his warriors through an Eternity Gate
Add a photo to this gallery
Retrieved from "https://warhammer40k.fandom.com/wiki/Eternity_Gate_(Necron)?oldid=324679"
Community content is available under CC-BY-SA unless otherwise noted.