"No matter how many Imperial lives our actions save, how many worlds we rescue from the clutches of monsters and how much selfless glory we cover ourselves in from one war zone to the next, none of it changes the bleak truth that we are cursed. And when the black tide rises, and drowns all that we are, does the legacy we leave behind excuse the monsters we become? Does it make our sacrifice worthwhile, as we are told? Or is it all swept away, rendered meaningless by the same bloody flood that takes our sanity? I just do not know..."

Erasmus Tycho, known as the Master of Sacrifice and later on as The Fallen Star, was the Captain of the Blood Angels Space Marines' 3rd Company and was once the best and brightest his Chapter had to offer. Indeed, there were those who whispered that he was being groomed as Commander Dante's successor.

When Tycho assumed command of the Blood Angels 3rd Company during the Second War for Armageddon, his star seemed truly on the rise. Tycho led his Battle-Brothers in a series of lightning fast assaults that saw Boss Grakka's Speed Freeks routed, the defences along the River Chaeron recaptured, and Ork supply lines sundered at half a dozen key points. For a time it seemed Tycho and his warriors might turn the tide of the Armageddon conflict almost single-handed.

Then, during a raid on an Ork position, Tycho's command was ambushed. Though they prevailed, Tycho himself was maimed by a brutal psychic assault from a Greenskin Weirdboy. He survived, but with one side of his face frozen in an ugly rictus grin. The damage was concealed using a golden death mask, yet the deeper hurt remained. Tycho was left with inner scars of bitterness and rage, the terrible extent of which would be revealed in the years to come. From then on, Tycho continued to wear the gold mask that covered the damaged half of his face.

After the Second War for Armageddon it swiftly became apparent that all was not well with Erasmus Tycho. Commander Dante reluctantly assigned Tycho to permanent battle duty, yet even there he was ever more violent of temperament, and his tactics became audacious to the point of foolhardiness.

Finally, when Ghazghkull returned to Armageddon during the Third War for Armageddon, and Tycho revisited the war that had seen him mutilated so many Terran years before, his mind snapped. Lost in the depths of the Black Rage, the Captain took his place in the Death Company. At the head of a seething mass of raving, delusional Battle-Brothers, Tycho led the assault upon the breach at the Ork-held hive city of Tempestora. Though his charge carried the day, and though the ferocity of his assault has since become legend, the Captain fell at the last.

In death he found redemption, his twisted face settling into an image of serenity. It is whispered in the halls of the Apothecarion that when his half-mask was removed during the funereal rites, not a single hint of disfigurement could be found.

Captain Erasmus Tycho was once the greatest strike leader the Blood Angels Chapter had ever known. Some even whispered that he would one day succeed Lord Commander Dante as the Chapter's leader. Now he stands as a grim reminder that even the Blood Angels' best and brightest Battle-Brothers are not safe from the embrace of the terrible Black Rage.

Tycho took command of the Blood Angels 3rd Company when his predecessor was slain during the Second War for Armageddon in 943.M41. The former Sergeant quickly proved his talent for command, orchestrating the rout of Warboss Grakka's Speed Freeks and recapturing key Imperial defensive positions along the River Chaeron. Enboldened by their successes, the 3rd Company pushed on, striking at the Ork supply lines from the sub-continent of Armageddon Prime.

It was on just such a mission that Tycho and his company were ambushed. Though the Blood Angels proved victorious, their Captain fell victim to an Ork Weirdboy's psychic assault early in the battle and was left for dead. Yet Tycho survived, but the after-effects of the psychic attack had paralysed half of his face, freezing it forever in a terrible rictus grin. Tycho's obsession with fine aesthetic taste and beauty was as great as that of any other Blood Angel and to him such a disfigurement was a fate worse than death.

So it was that rage began to move into Tycho's once-pure heart, opening the door to the pent-up anger that lay at the core of Tycho's being, just as it does for every man who is implanted with the the genetic legacy of Sanguinius. Unable to bear the pitiful looks of his Battle-Brothers, Tycho ordered the Chapter's most revered Artificer to forge a golden death mask to cover his disfigurement. This simple act seemed to provide Tycho a measure of peace and for a time he displayed his old brilliance.

For the remainder of the Armageddon Campaign, the Blood Angels 3rd Company remained in the thick of the fighting, Tycho commanding them as effectively as he had before, though none could deny that the Captain now displayed an increased fervour whenever he tasted the tang of Ork blood upon the air.

In the wake of the Second War for Armageddon, it soon became clear that all was not right with Tycho. No longer could he relax in the halls of the Blood Angels' fortress-monastery on Baal, for its beauty served only to remind him of his own mutilation. Dante reluctantly assigned Tycho to permanent battle duty, yet even there he became ever more violent of temperament and his tactics soon became aggressive to the point of foolhardiness.

During the Third War for Armageddon in 998.M41, Tycho and his 3rd Company revisited the world where he had endured unimaginable pain fifty standard years earlier. Battles raged across the surface of the planet, as the Imperium fought against the hordes of the Ork Warlord Ghazghkull Thraka.

One such clash took place outside the walls of Hive Tempestora. Shortly before the conflict, Tycho fell prey to the Black Rage. Overcome by visions of his Primarch, the Angel Sanguinius during his death at the hands of Horus ten thousand years before, Tycho and a number of his troops joined the damned ranks of the Blood Angels' infamous Death Company.

Tycho and the newly formed Death Company led the attacks on the Ork-held defences of Hive Tempestora, wreaking havoc and carnage alike. It is said that Tycho fought with the same fury and skill as his Primarch, sustaining many grievous wounds in the battle, though his ultimate fate had already been decided. Tycho reached the Ork lines, his golden mask hanging from his head where it had been torn off his face, and had begun his vengeful charge against the Orks when he was overrun by a horde of the Greenskins, finally perishing.

Tycho's valiant efforts to destroy the Orks did not end in vain. His counterattack enabled the Blood Angels and Astra Militarum forces to gain control of the bulwarks. When Tycho's limp form was laid at the feet of Chaplain Lemartes, his once noble appearance had changed beyond all belief. Upon leaving Armageddon, the Blood Angels bore the body of Tycho and those of their brethren who had fallen at the breach of Tempestora.

Their corpses were entombed in large granite sarcophagi and carried aboard a waiting Thunderhawk gunship, atop the shoulders of the Chapter's mourning Sanguinary Guard. Tycho's legacy and the other heroes who had fallen on the blood-soaked battlefields of Armageddon would live on forever in the Chapter's memory.

Captain Tycho, Master of Sacrifice, before succumbing to the Black Rage 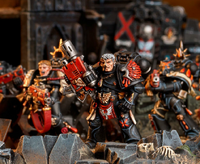 Captain Tycho, The Fallen Star, after his induction into the Death Company
Add a photo to this gallery
Retrieved from "https://warhammer40k.fandom.com/wiki/Erasmus_Tycho?oldid=347918"
Community content is available under CC-BY-SA unless otherwise noted.