The Endless Murder is a warband of Chaos Space Marines that splintered from the World Eaters Traitor Legion. Nobody knows where the Endless Murder come from, or where they go when the killing is done. Appearing like a tidal wave from a becalmed ocean, they strike without warning and reduce all before them to bloody carrion and heaped skulls. Then they vanish once more like mist.

Most recently, during the 13th Black Crusade, this warband fought alongside the monstrous Butcherhorde, a conglomeration of multiple World Eaters warbands led by the infamous Khârn the Betrayer, who led them in the slaughter of the Imperial world of Amethal in the Diamor System against the valiant defence of the Blood Angels Space Marine Chapter.

The Endless Murder warband wears coquelicot colours on their battle-plate trimmed in silver and brass, which denotes their allegiance to the Blood God Khorne.

The Endless Murder warband's icon is reminiscent of their original Legion icon -- a world being devoured by a monstrous black maw, centred on a field of reddish-orange. 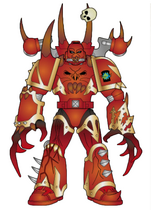 A Possessed Chaos Space Marine of the Endless Murder warband
Add a photo to this gallery
Retrieved from "https://warhammer40k.fandom.com/wiki/Endless_Murder?oldid=335138"
Community content is available under CC-BY-SA unless otherwise noted.