The Emperor's Sword is a famed relic blade that was wielded by the Emperor of Mankind Himself during the Great Crusade and was eventually passed on to the resurrected Primarch Roboute Guilliman in 999.M41 by the Archmagos Dominus Belisarius Cawl in the wake of the 13th Black Crusade and the Ultramar Campaign, just before he assumed the mantle of Lord Commander of the Imperium for the second time. The weapon had been kept safely in Cawl's possession on Mars for over 10,000 standard years, since the end of the Horus Heresy and Guilliman's first tenure as the Lord Commander. 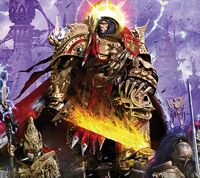 Wielding his burning blade, the Emperor leads the Legio Custodes and the Sisters of Silence during the war in the Imperial Webway against the daemonic legions of Chaos during the Horus Heresy 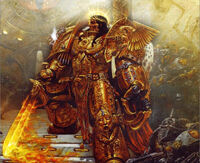 The Emepror wielding his trademark sword during the epic climatic battle with Warmaster Horus aboard his flagship the Vengeful Spirit.
Add a photo to this gallery
Retrieved from "https://warhammer40k.fandom.com/wiki/Emperor%27s_Sword_(Weapon)?oldid=299042"
Community content is available under CC-BY-SA unless otherwise noted.