"I have lost brothers, aye, and wept over their graves. Good men deserve tears to mark their passing. Even the Emperor weeps when His warriors fall. Royal thralls gather that mourning dew in blessed vials, to be treasured as relics forevermore. Regret is weakness. Guilt is weakness. But sorrow? Sorrow is a chamber in any soldier's heart. Sorrow is felt even by the divine."

The Emperor's Spears is a Loyalist Successor Space Marine Chapter of the Ultramarines. The Chapter was created during the 25th Founding in the latter half of the 40th Millennium, the so-called "Bastion Founding." The Emperor's Spears hail from the feral Ocean World of Nemeton.

The Emperor's Spears was one of three Chapters that once made up the Adeptus Vaelarii, better known as the Sentinels of the Veil. These Astartes guardians once stood watch over the Imperial worlds located in the backwater region of the galaxy called Elara's Veil.

Due to separate tragedies suffered by their fellow Chapters among the Sentinels of the Veil, only the Emperor's Spears remain as the stalwart protectors of the scattered worlds of this region from the horrors of the Outer Dark. Only time will tell if this Chapter will be able to maintain its vigil successfully, for it is a depleted force on the Imperium's benighted frontier.

While records on the origins of the Emperor's Spears are scarce, the first recorded encounter with the Chapter came in 594.M40, suggesting they have been defending the Imperium for perhaps a millennium and a half, making them relatively young by the standards of Space Marine Chapters.

Upon their inception, they were charged with standing sentinel over the scattered worlds of the Elara's Veil region of Ultima Segmentum, ever watchful for insurrection and rebellion, as well as external threats.

This backwater sector of the galaxy was once protected by the oath of unity sworn by three mighty Chapters of the Adeptus Astartes -- the Star Scorpions, who were undone by flaws in their genetic coding; the Celestial Lions, who were ravaged by the Inquisition for sins they did not commit, and the Emperor's Spears.

Now, after hundreds of standard years, the Emperor's Spears still keep their vigil. They are barbarian watchmen against the Outer Dark; bloodied but unbroken in their long duty.

Even in their relatively short history, the Emperor's Spears have clashed with their fellow Space Marines, notably the Aurora Chapter during the Eukari Insurrection. So ruinous was the conflict between the Chapters that the Ultramarines sent representatives to quell the unrest, ruling that the Emperor's Spears had acted rashly and were to blame for the blows that were exchanged.

It is only in recent years that High King Arucatas the Swordbearer has eased the tensions that ensued between the Chapter and the other descendants of the XIII Legion of old. No records exist of the Emperor's Spears and Aurora Chapter fighting alongside one another in the seven centuries since.

Since the opening of the Great Rift, the Emperor's Spears have been beset by new dangers. The Rift is visible from Nemeton, and its baleful influence has been felt across the Elara's Veil region. Hard pressed by constant war and isolation following the loss of their fellow Chapters, the Emperor's Spears now stand upon the brink of destruction, and it remains to be seen how its future will unfold...

The Emperor's Spears divert substantially from the organisational dictates of the Codex Astartes. They have a vast Chapter fleet, and specialise in air-to-ground warfare and orbital drop assaults. They are particularly mobile when it comes to deployment and redeployment, and are not short of air assets.

The Emperor's Spears often ally with the military forces of the Adeptus Mechanicus and Skitarii Legions of the Forge Moon of Bellona in their own star system and Imperial Knights from Raukama, a Knight World located in Elara's Veil.

The Chapter is organised into what it calls "War Hosts" instead of the traditional companies. These are autonomous units that often range far from Nemeton in defence of Elara's Veil. The Chapter Master of the Emperor's Spears is known as the "High King" while its captains are called "Warhost Lords."

The Chapter's 1st Company is called "the Paragons." These warriors forsake any chance to rise further in the Chapter's hierarchy, and it is believed that they must undergo blood rites and other hidden rituals to gain their elite position. On the battlefield, they are fierce hunters, focusing on the elimination of enemy leaders.

Chapter specialists known as "Druids" replace the usual Librarians, Chaplains, Techmarines and Apothecaries of Codex-compliant Chapters. These warrior-priests are always ready to harvest the gene-seed of their fallen Battle-Brothers, as well as performing the traditional duties of the standard Codex roles based on their specialist skills and esoteric abilities.

The homeworld of the Emperor's Spears is the Ocean World of Nemeton. Its landmasses are small and mountainous, and heavily forested. There are several equatorial landmasses that are largely marshy jungle. Due to the temperate weather, rainfall is constant across most of the surface.

The Twelve Tribes of Nemeton represent a mono-culture of interacting pre-industrial tribes who loosely share certain touchstones, including beliefs, cultural practices and language. As Elara's Veil is a nebula that takes up most of Nemeton's night sky, the Nemetese clans have come to believe that rain is something superstitious and sacred born from the great lights in the sky, a belief that is considered borderline heretical by many of the more conservative factions of the Imperium.

The relationship between the Chapter and Nemeton's people is very different from that of most Space Marine Chapters and their recruiting stock. The tribes see the Space Marines as the spirits of lost children, taking their young before their time and leaving them simply ghosts to be mourned.

Nemeton itself is a curiously well-defended world. A mighty minefield protects approaches to the planet, while many of the rocks that make up Nemeton's rings have been turned into weapons platforms capable of bombarding attackers with waves of deadly torpedoes.

Further defences come from the Tech-priests of Bellona, a Forge Moon in the Nemeton System. The Emperor's Spears have formed close links with Bellona's leaders, and together they are the foremost defenders of Elara's Veil.

The Emperor's Spears primarily wear sky blue Power Armour and a white helm. This Chapter does not display company numbers on its Power Armour, and it does not paint the trim of its shoulder plates to designate company. Squads are marked with Nemetese runes or Roman numerals on the shoulder pauldrons or greaves.

Nemetese runes look similar to Ogham, an early medieval runic alphabet used to write the early Irish language. Outsiders cannot penetrate the meaning of these specific symbols, but they are never used elsewhere in the Nemetese tongue, and do not seem to be numbers.

Most warriors bear personal heraldry on one knee plate, which is painted in a deeper blue. This heraldry usually reflects a specific campaign the Battle-Brother fought in, or the Manticora Bestia Fidelitas, a sigil representing the unity of the Adeptus Vaelarii. The Skitarii of Bellona and allied Astra Militarum regiments often also bear this sigil. Many Emperor's Spears wear cloaks made from the hides of beasts they have hunted and slain on Nemeton.

The colour of the right knee guard is dark blue, almost black, and is used for personal heraldry. Many Emperor's Spears have the sigil of the Sentinels of the Veil placed there, denoting them as the warriors chosen to watch over the region of space called Elara's Veil. This symbol takes the form of the red and black sub-sector symbol which depicts Elara's Veil on Imperial stellar cartographic maps, for example, or it can be a personalised symbol of the nebula itself.

This is similar to the way the Astral Claws, Lamenters, Mantis Warriors, and Executioners wore the unique marking of the Maelstrom Warders to designate their role as sentinels over the Warp rift known as the Maelstrom.

Many Veteran members of the Emperor's Spears have the symbol of the Star Scorpions displayed on the right knee guard instead to reflect the campaigns they fought alongside their lost sibling-Chapter. Obviously, their newly-arrived Primaris Space Marine brethren do not display these symbols. Other Emperor's Spears Astartes, including the Chapter's Primaris brethren, often have the Celestial Lions' symbol engraved on their right poleyn, reflecting the many crusades fought alongside the Lions.

Another common symbol displayed on the Emperor's Spears' right knee guard is the Argent Gauntlet, which is worn by warriors from both the Celestial Lions and the Emperor's Spears and takes the form of a silver fist. This is the symbol of the Exodus Armada. Any warrior of any rank is authorised to wear it, so this, or the symbol for the Sentinels of the Veil, is often the default icon that is displayed on the right knee if the warrior makes no other choice.

The non-commissioned and line officers of the Emperor's Spears sometimes make use of helmet plumes. Sergeants can wear red transverse (side-to-side) crests, similar to the ones worn by the ancient Space Marine Legion Centurions of the Great Crusade era. Veteran Sergeants wear red-and-black striped transverse crests. Lieutenants have red-and-black striped longitudinal crests (front-to-back) while Captains wear white longitudinal crests. While most Emperor's Spears officers wear helm crests, others use the standard helms and helm colours proscribed in the tenets of the Codex Astartes, similar to the Ultramarines.

Unusually, the Emperor's Spears' Techmarines don't wear many symbols of Mars. Instead, they opt to display the icon of the nearby Forge Moon of Bellona, which takes the form of a halo (a half-cog) over a skull weeping blood. This is the same symbol used by the Cult Mechanicus and Skitarii Legions of Bellona (mostly black with red patches).

The Druids who serve as Librarians, Apothecaries and Techmarines have white helms, and the few that have also served in the 1st Company possess the red trident on their helm. The Druids who take the place of Chaplains wear the traditional black battle-plate with bone-white helms. Red tear-trails are carefully applied to the skull-mask's cheeks, as if weeping. Any skulls that are displayed on their armour also have these same blood-tears, which represent some unknown meaning from Nemetese legends.

Space Marines from the Emperor's Spears have also been known to wear trinkets, talismans, serpent scale-hides and fur pelts. These are usually gifts from the Twelve Tribes of Nemeton, not things the Astartes have hunted or made for themselves.

These primitive fetishes are nowhere near as common as they are on the Space Wolves' wargear, but appear very similar to those worn amongst the Space Marines of the Salamanders Chapter. The most common ornamentation worn by the Emperor's Spears are Nemetese runes on their armour, which are usually black, silver, or white -- either painted or carved into talismans.

Each Warhost marks their azure armour with a range of Nemetese Ogham runes that are believed to comprise a mix of unit markings, honour sigils and other more esoteric icons.

The Emperor's Spears have codes of conduct that forbid them from becoming too filthy. Even in the middle of a campaign, they are forced to maintain their armour as well as they can, to respect its Machine Spirit and to intimidate the enemy, rather than looking battered and therefore weak.

The Emperor's Spears' Chapter badge is a black trident pointed upward with a white skull centred upon it, all centred on a field of sky blue. 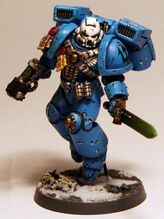 Emperor's Spears Tactical Squad
Add a photo to this gallery
Retrieved from "https://warhammer40k.fandom.com/wiki/Emperor%27s_Spears?oldid=353873"
Community content is available under CC-BY-SA unless otherwise noted.