The Emperor's Shadows is a Loyalist Space Marine Chapter of unknown Founding and origin.

The Emperor's Shadows' power armour colour scheme is loosely based off of that of the Black Templars, with contrasting details in red and turquoise.

Many Chapter historical references are subtly incorporated into the Chapter's squad iconography which allude to the ancient Japanese samurai.

The Emperor's Shadows' Chapter badge is stenciled onto a white leather papyrus material -- a black bonsai tree silhouette with a red rising sun behind it, surrounded by Japanese Kanji characters. This leather is strapped over a field of turquoise, secured by small cords.

The Emperor's Shadows were originally created by Victoria Lamb using the colour scheme of the Black Templars as a starting point for the "Creating a Chapter" article in White Dwarf 299. 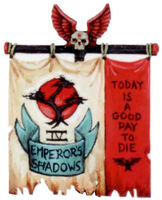 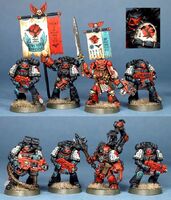