"By thy wounds, know thy worth."


— The eighty-eighth stanza of the Scriptures of Slaughter

The Eightscarred are a Khorne Daemonkin warband comprised of Chaos Space Marines, Chaos Cultists and Daemons that is utterly uncompromising in their violent faith.

The mortal members of this warband are unhinged fanatics who see themselves as Khorne's only true disciples.

Their zealotry is horrific in its intensity, driving them from one war zone to the next amid a never-ending tidal wave of gore.

A Bloodthirster of the third rank named Gha'Kharax sits ever in judgement of his worshippers. If he approves of a warrior's efforts, then, at battle's end, he reaches through the veil to carve a livid scar in that warrior's flesh. One by one, these bloody wounds form the rune of Khorne, marking the warrior as worthy to fight alongside Gha'Kharax's cohort.

Should an aspirant ever fail to earn his scar, he will gladly fall upon his own roaring chainsword as an act of penance. The sheer zealotry of the Eightscarred draws many Khornate Berzerkers to their banner, for this level of fanaticism echoes their own.

Their devotion is such that they draw Gha'Kharax's followers through the veil with ease, and have fought in their demigod's shadow on many occasions.

The elite warriors of the Eightscarred display the warband's rune on their left pauldron and their squad markings in various locations.

This warband's badge is a combination of the eight-pointed Star of Chaos dominated by a Khornate rune, the Mark of Khorne, set in red on a field of black.

Markings of The Eightscarred - A Bloodthirster of the third rank named Gha'Kharax sits in judgement of his worshippers. Those warriors who prove their worth receive bloody wounds that gradually form the rune of Khorne.

A Chaos Space Marine of The Eightscarred Khorne Daemonkin warband. 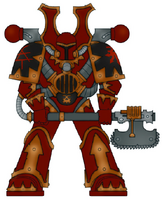 A Khorne Berzerker of The Eightscarrred Khorne Daemonkin warband. 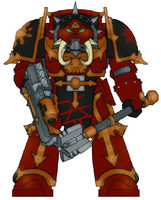 A Chaos Terminator of The Eightscarred warband.

A Bloodletter, a Lesser Daemon of Khorne, of The Eightscarred warband. The Daemons of this warband have fire-blackened torsos marked with lived red pack-scars.
Add a photo to this gallery
Retrieved from "https://warhammer40k.fandom.com/wiki/Eightscarred,_The?oldid=370972"
Community content is available under CC-BY-SA unless otherwise noted.