The heavy artillery pieces used by these companies are the big guns, deployed well back from the front lines to provide a sustained bombardment of the enemy forces during a major set-piece engagement. Imperial heavy artillery includes the Imperial Guard's workhorse Earthshaker Cannon, and the aging Medusa heavy siege gun.

Both types of heavy artillery fire sustained bombardments, box barrages to isolate a battlefield from enemy reinforcements, harassing fire during an enemy advance, counter-battery fire to suppress enemy artillery and destructive fire at selected enemy units, all spotted for by artillery officers who serve in the dangerous duty as forward observers on the front lines.

The Earthshaker is a 132 millimetre calibre gun, capable of firing a 38 kilogram shell over 15 kilometres at a velocity of 814 miles per hour. So a shell fired to the weapon's maximum range would take 19 seconds to reach its point of impact. The cannon itself is extremely reliable and consistent. It uses its standard five powder charges, but this can be increased with the addition of charges six and seven. This will increase the range of the weapon at the risk of the extra wear and tear on the barrel of the gun itself.

Firing higher charged shots produces considerable strain and erosion on the barrel and the firing chamber, so that the weapon's breach seal fails, dramatically decreasing the gun's range and muzzle velocity and increasing the risk of a misfire. Because of this, the use of higher charge shells must be authorised by high command and the firing is recorded on each gun. No gun may fire more than 20 overcharged rounds.

The Earthshaker can also fire different types of shells as the situation requires, including smoke shells, incendiary shells, illumination shells and diamantine-tipped armour-penetrating shells. While the Earthshaker is not as strong as the Demolisher Cannon in terms of brute explosive force, its remains an invaluable weapon thanks to its range. The Earthshaker Cannon is too large to be towed by a Centaur field utility vehicle, and the larger Trojan towing vehicle is needed instead. The Trojan can also carry the gun's crew and some of its ammunition as needed.

Siege regiments of the Imperial Guard are supported not only by their own heavy artillery companies but also by the overall army's bombardment corps. These are concentrations of heavy artillery pieces like the Earthshaker and the Medusa that back up the attacking regiments and are used to maintain sustained bombardments before the launch of major offensives against an enemy's entrenched, fortified positions.

There are several different variants of the Earthshaker Cannon used by the Imperial Guard's siege regiments. These include the following:

The Earthshaker Cannon can be mounted either on a Basilisk mobile artillery piece or can be part of a fixed emplacement. The Earthshaker can be deployed in a fortification or used as a fixed positional unit, and in both cases will only be deployed well behind the Imperial Guard's front lines.

Known Users of the Earthshaker Cannon

A Lucius Pattern Earthshaker Cannon of the Death Korps of Krieg

A Lucius Pattern Earthshaker Cannon of the Death Korps of Krieg

A Phaeton Pattern Earhshaker being towed by a Trojan

A Phaeton Pattern Earthshaker Cannon being towed by a Trojan

An Earthshaker artillery platform of the 89th Tallarn regiment, deployed during the Taros Campaign 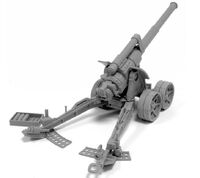 A Lucius Pattern Earthshaker Cannon in its firing position
Español
Community content is available under CC-BY-SA unless otherwise noted.
Advertisement