The Drone Sentry Turret consists of a cylindrical armoured hull with a pop-up weapons turret roughly the size of a Tau Battlesuit. The armour used in its construction is made of the same nano-crystalline compound used in other Tau vehicles and Battlesuits and this makes the turret resilient to all but heavy anti-vehicle weapons. The weapons turret is usually lowered and kept inside the hull, where it remains inactive until a suitable target is identified by the turret's sensors. It then activates and elevates the turret before leveling its weaponry and firing until all enemies are eliminated, returning to its inactive posture when there are no more targets within range. Unlike Imperial Tarantula Sentry Guns, the Drone Sentry Turret's artificial intelligence is capable of making its own targeting decisions, and can effectively differentiate between friendly and enemy units. The Drone Sentry Turret's artificial intelligence can also choose to ignore some targets in favour of others which it determines are a higher priority. The turret's primary sensor cluster is mounted in between its twin-linked weapons, and the turret is capable of spinning a full 360 degrees so that it can track targets in any position.

Tau Drone Sentry Turrets are usually deployed onto a battlefield by Tau aircraft such as an Orca Dropship or a Manta that drops them into position. Pathfinder teams or Tetras equipped with Marker Lights can aid this deployment by designating target points to allow the drops to be more accurate. Each Drone Sentry Turret is equipped with a small Tau Jetpack underneath it to direct and slow its descent. Once in place, the turret will activate but remain dormant until an enemy is identified by its sensors. As Tau strategic doctrine does not usually seek to hold ground, preferring mobile warfare, Drone Sentry Turrets are commonly deployed as a Tau force advances or retreats, to guard a route that Pathfinder Teams have identified as likely to be used by enemy forces or to stall an enemy and provide a distraction. During a battle, the turrets are commonly used to help bolster a firing line and provide extra heavy firepower to Fire Warrior teams. Depending on the armament of the turret, the turret's roles range from laying down rapid anti-infantry suppressive fire with Burst Cannons to eliminating heavily armoured infantry with Plasma Rifles. However, it is often necessary for Tau forces to defend strategically important locations and rather than waste Fire Warriors with static garrison duty, the Tau will use Drones or Drone Sentry Turrets instead. As a result, Drone Sentry Turrets will often be found protecting command posts, airfields or supply bases where they reinforce defence lines or form expendable pockets of resistance that can also be used as a lure.

During the Taros Campaign, sentry turrets were commonly encountered by all the Imperium's forces. The deserts were liberally seeded with them, and since they were equipped with Disruption Pods, they were often used by the Tau forces as ambush units. The Imperial Guard's Tallarn scout units often found themselves under fire from a turret, which then had to be attacked and destroyed. Hydro-Processing Plant 23-30 was defended by many turrets, all disguised with Disruption Pods, which the aerial reconnaissance performed by the Elysian Drop Troops units deployed to Taros failed to notice. As a result, Storm Trooper squads leading the airborne attack came under heavy fire from these unidentified Tau heavy weapons, and took heavy casualties in the initial landings. The Imperium's records claim that, in total, over 200 turrets were encountered and destroyed during the fighting. While this is likely to be an inflated figure, it illustrates the wide use made of these turrets by Tau forces.

Drone Sentry Turrets can be armed with a wide array of heavy weaponry, including:

Drone Sentry Turrets can also be equipped with defensive upgrades, such as: 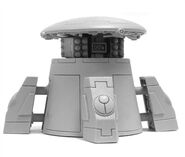 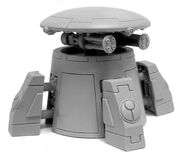 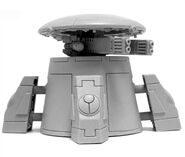 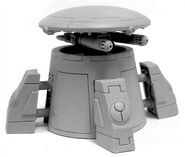 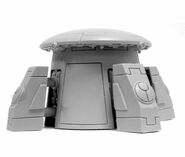 An inactive Drone Sentry Turret
Add a photo to this gallery
Retrieved from "https://warhammer40k.fandom.com/wiki/Drone_Sentry_Turret?oldid=298114"
Community content is available under CC-BY-SA unless otherwise noted.