"Though his aptitude for murder is legendary, my interest in Drazhar lies elsewhere. None of the Drukhari whose minds I have seen know what he is or where he came from. But they do fear him, and rightly so. I suspect even the mighty Vect questions what this silent executioner is capable of. Could it be true that he is but dust encased in armour, like my own accursed brothers -- and if so, is there a way that I can bend him to my will? I must be patient in this regard, but time will tell."

Drazhar, the "Master of Blades," occupies the esteemed position of Executioner, the champion of the Drukhari Order of Incubi.

Drazhar is lethality personified and is believed by many Craftworld Aeldari and Drukhari to have also once been Arhra, the first Phoenix Lord of the Striking Scorpions Aspect Warriors before he was corrupted and began to walk the Path of Damnation.

Amongst the insular ranks of the Drukhari Incubi, Drazhar remains an enigma. All that is known is that he entered the Great Shrine of the Incubi unannounced and unbidden, clad in ancient segmented armour of a senior member of their order. He proceeded to cut his way through into the inner sanctum, leaving a trail of dismembered hands and fallen blades on the flagstones. When Drazhar approached the shrine's enthroned Hierarch, he saluted him in challenge.

Enraged at the upstart's contempt for proper protocol, the Hierarch rose from his throne, entered the candlelit dueling circle and assumed a battle stance. The Hierarch's overconfidence and smug superiority quickly evaporated when the challenger launched himself with deadly mantis-like speed, striking with his Demi-klaives in a furious assault.

Within Terran minutes the duel was over, and the newcomer stepped over the Hierarch's dismembered body. The challenger was entitled to take the throne by all rights, but Drazhar merely cleaned his blade of the Hierarch's blood and made a simple bow.

The mysterious appearance of this upstart gave rise to circumspection, many wild theories and unanswered questions. It was soon confirmed within a matter of solar weeks that none of the Incubi shrines across Commorragh had ever heard of Drazhar, or recognised his unique and ancient wargear. Some whispered that he was actually Arhra, the fabled Dark Father of the Incubi incarnate and the Fallen Phoenix of the Asuryani Striking Scorpions Aspect Shrine.

Others say that his armour is merely filled with nothing more than bone-dust. What was soon confirmed beyond a shadow of a doubt was that no matter how skilled his opponents were, Drazhar always emerged victorious when challenged.

He has never shown any inclination to take up the position of Hierarch or Klaivex, though the Master of Blades' merciless skill in the battle arts of the Incubi is unparalleled. Drazhar instead holds an esteemed position within the Incubi order as Executioner, the champion of his order.

Drazhar is taller and more lithe than other Incubi, able to move lightning quick, striking his foes with his pair of grimly-filigreed Demi-klaives at any that dare even raise a weapon in his direction. His uncanny ability to move almost supernaturally-fast enables the Master of Blades to dart through even the most chaotic melee to cut his chosen foe down before they are even able to raise a blade or twitch their trigger fingers.

Those chosen as Drazhar's prey have few options other than to commend themselves to the gods they hold dear, for once they are marked by the Master of Blades they have only seconds to live.

Drazhar has become an integral part of the Great Shrine of the Incubi since his dramatic appearance, but has famously never spoken, nor even removed his helmet, not even to eat or sleep. Even the name Drazhar is ceremonial, meaning only "living sword" in the Aeldari Lexicon. The most that can be expected from Drazhar by way of conversation is an occasional slight nod or tilt of the head, and it is only the most senior Incubi that are accorded even this scant courtesy.

The lords of the other Incubi shrines treat the Master of Blades with extreme suspicion, for Drazhar alone remains incorruptible by emotion or pride, unlike the other Incubi lords whose black hearts still flicker with a small flame of ambition. He simply exists to kill -- nothing more, nothing less.

Regardless of any suspicions that may be held against Drazhar, in him the Incubi ideal of violent perfection is exquisitely personified. His every strike exemplifies the tenets of his order, and each life he claims serves as a gruesome liturgy for his dark brethren.

Those Incubi who fight in the presence of Drazhar set aside their deep-seated jealousy, and are driven by his unquestionable skill to even greater extremes of martial expertise. Drazhar invariably becomes the locus of murder on the battlefield, the calm centre in a storm of beautifully enacted violence.

Drazhar is one of very few Commorrites whose atrocities are widely admired within the Dark City. The deeds of this enigmatic bladesman are often spoken about, particularly by those Drukhari who managed to secure his services on a realspace raid. There are countless stories of his macabre work, such as the time he personally butchered every Imperial defender in the spire of Hive Tarson, or when he singlehandedly dispatched a trio of Custodian Guard at close quarters.

Drazhar is clad in an ornate and archaic version of the Incubus Warsuit, the traditional armour of the Incubi. This marvel of Aeldari technology offers protection similar to that of Artificer Armour, without hampering the Master of Blades' lethal speed in the least.

The ornate and cruel-looking helmet of the suit incorporates the traditional Tormentor weapon of the Incubi, in this case crafted from the Spirit Stone of an Asuryani Exarch, and in each hand, Drazhar holds one of his Demi-klaive blades. The mastery he has attained with these paired Power Weapons is unparalleled, and allow him to dispatch almost any foe who has the temerity to stand before him.

Few are those with the skill to offer Drazhar a worthy challenge, and these individuals soon find themselves praying for death, as Drazhar slowly dismembers them with the razor-like slashes of his twin weapons.

Drazhar stalking the darkness of Commorragh 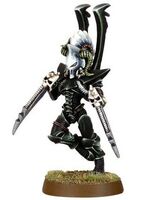 Drazhar, the Master of Blades
Add a photo to this gallery
Retrieved from "https://warhammer40k.fandom.com/wiki/Drazhar?oldid=352889"
Community content is available under CC-BY-SA unless otherwise noted.