The Dracosan Armoured Carrier was a heavy-duty, tracked transport almost exclusively used by Solar Auxilia Cohorts during the Great Crusade and Horus Heresy eras during the late 30th and early 31st Millennia. Equipped with a fearsome array of weapons of its own, including either a powerful Twin-linked Lascannon or a mighty Demolisher Cannon at the expense of some of its transport capacity, the Dracosan could steadfastly defend itself against enemy counter-attack and annihilate an adversary's emplacements to rubble before its complement of auxiliaries disembarked to storm what little remained of their objective. Since the bygone era of the Heresy, the Dracosan have since been supplanted by other designs.

Every Solar Auxilia Cohort was intended to operate as a self-contained force, and it was organised and supplied with additional infrastructural support based on its assigned role. For example, if on exploration duty or in open warfare, the cohorts almost always operate as a mechanised force, utilising large numbers of heavy, all-environment armoured transports as mounts and rally points for their troops. Most common of these was the Dracosan Armoured Transport, which possessed both the transport capacity to carry entire lasrifle sections in a single vehicle and is possessed of both considerably more armour and inherent rad/alchem protection than the ubiquitous Rhino armoured personnel carrier, as well as a life support system of greater endurance.

The Dracosan was a common sight in the late 30th Millennium, being manufactured under compact by several dozen Forge Worlds across the Imperium to standards only usually required of war machines destined for service with the Legiones Astartes. A heavily armed and armoured carrier, the Dracosan was large enough to accomodate a fully strength Solar Auxilia Infantry Tercio of twenty auxiliaries, and heavily armoured enough to protect them from all but the most intense of enemy fire. Being intended for service in hostile environments and even the void of space, the Dracosan needed to be absolutely air-tight as not to endanger the lives of its passengers and crew.

Equipped with a fearsome array of weapons of its own, the Dracosan could steadfastly defend itself against enemy counter-attack and pound enemy positions to dust before the auxiliaries disembarked to storm what remained of their objective. Given the necessary resources and expenditures to build such an exceptional vehicle, the Dracosan was employed almost exclusively by forces configured in the Solar Auxilia pattern, whether these "regular" Excertus Imperialis units or other forces following the same order of battle, such as the household troops of certain Rogue Traders Militant or, occasionally, the elite retainers of high status Imperial Commanders.

A Dracosan Armoured Carrier (side view) 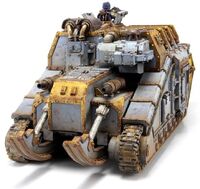