"Death comes in many forms, but I must count aerial bombardment amongst the most satisfylingly efficient."

—Executioner Ezandrakh of the Mephrit Dynasty; Herald of the Red Harvest

A Doom Scythe is a Necron aircraft and Attack Craft capable of combat operations in both the void and within a planet's atmosphere. The Doom Scythe serves the Necron forces in the interceptor, starship assault and fighter-bomber roles. It is designed to range independently of the main Necron military force whilst visiting terror and destruction upon its enemies. Capable of destroying both infantry and vehicles alike from the air with impunity, a Doom Scythe is a dangerous foe that can often cause significant destruction to an enemy army on its own.

Doom Scythes are heralds of terror and dismay, supersonic fighter craft that range far ahead of a Necron invasion. Unlike many of the forces deployed by the Necrons, Doom Scythes can function in a highly independent manner. Much of the aircraft’s super-structure houses datastacks that are in turn heavily laden with strike plans, stratagems and tactical variants. When faced with a situation outside of known parameters, the pilot can sift through and retrieve the correct response from this datastack. Thanks to the ruthless precision of his android brain, the pilot can simulate billions of possible strategies in the span of a few nanoseconds.

A Doom Scythe is piloted by a Necron Immortal who is hard-wired into his aircraft. Because of his robotic nature, the pilot is uninhibited by mortal frailties and is able to steer the craft to higher speeds and perform more extreme manoeuvres than pilots of flesh and blood. Likewise, a Doom Scythe is also a small spacecraft that fulfils the Attack Craft role in Necron fleets, despite the lack of a cockpit to protect the pilot; such niceties as oxygen and pressure are of little consequence for the undying form of the Necrons.

Doom Scythes are often deployed to sap the resolve of the enemy before the battle beings in proper, for its presence induces an almost irrational terror in living creatures. A Doom Scythe's primary propulsion systems is a scaled up and augmented version of the dimensional repulsor drive employed by Tomb Blades. On these smaller craft, the whine of the drive is piercing and discomforting. On a Doom Scythe, the scale and amplitude of the sound is many hundreds times greater; it resonates deep within the primitive core of living brains, playing havoc with memory, perception and sanity. Victims can collapse into a catatonia, slump into slack-jawed vacuity and suffer hallucinations of their dead comrades returned to worm-eaten life. Little wonder is it then that entire armies of battle-tested veterans have been known to throw down their weapons and flee at a Doom Scythe’s onset, or else gouge out their own eyes in futile attempts to stop the images scratching at their senses.

Should the foe not yield in battle on the Doom Scythe’s first pass, its pilot will then unleash the full fury of the aircraft’s firepower. Tesla Destructors explode into life, raking the battlefield with arcs of eldritch lightning, instantly incinerating any infantry not cowering in cover. Armoured targets can perhaps weather this sizzling storm, but they cannot hope to stand against the fury of the Doom Scythe's main weapon -- the aptly named and rightly feared Death Ray. There is seldom a warning before the Death Ray strikes, for any sound it makes is lost under the unearthly wailing of the Doom Scythe’s engines. A particularly alert foe might recognise the nimbus of energy building up around the focusing crystal, or the abrupt change in air pressure; but few recognise the significance in time. The nimbus pulses one final time and an irresistible beam of blinding white light bursts from the Doom Scythe’s underside, vaporising infantry and tanks alike; leaving only charred and rutted terrain in its wake. A single Doom Scythe can carve its way through an entire armoured column so long as its Death Ray remains operational; and a full squadron can reduce the sprawling spires of a hive city to fulminating slag in less than an hour. 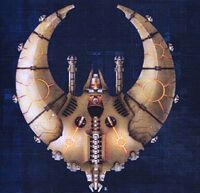 A Necron Doom Scythe of the Maynarkh Dynasty outfitted for a precision ground attack role during the assault on Amarah Prime in the Orphean War, dorsal view 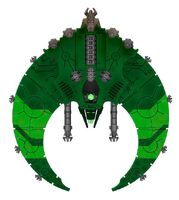 Top view of a Doom Scythe 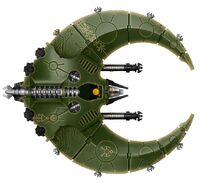 A Doom Scythe of the Mephrit Dynasty, dorsal view

Close-up view of a Doom Scythe's ventral turret-mounted Death Ray
Add a photo to this gallery
Retrieved from "https://warhammer40k.fandom.com/wiki/Doom_Scythe?oldid=288104"
Community content is available under CC-BY-SA unless otherwise noted.