The Domitar-class Battle-Automata was the ultimate Battle-Automata to enter production among the Forge Worlds of the Mechanicum before the terrible events of the Horus Heresy and the Schism of Mars tore the Imperium asunder in the early 31st Millennium. Considered by many savants to be the pinnacle of Martian ingenuity and Imperial Battle-Automata technology, a Domitar is a towering robot, nearly twice the size of the more widespread Castellax and a feared sight on the battlefields of the 32nd Millennium. As with so many other sophisticated technologies from this period, the Imperium of Man and the Martian Priesthood of the late 41st Millennium have sadly lost the knowledge required to create such powerful engines of destruction.

At a fundamental level, the Domitar-class Battle-Automata is derived from the much more ancient Conqueror-class, whose construction plans were safeguarded inside one of the incredibly rare STC databases discovered by the Mechanicum. Following the initial launch of the Great Crusade and encounters with new and terrifying species of xenos, the Mechanicum recognised that it would need a new type of Battle-Automata for its most militant arm, the Ordo Reductor, to successfully face these threats. However, development of an entirely new warmachine takes time, and as politics go, the Martian Priesthood spent several standard years arguing which forge-fanes would be tasked with the arduous but glorious task of developing this new Battle-Automata. The requirements that would lead to the creation of the Domitar Pattern were quite specific: the new Battle-Automata had to be fast, enduring and well-armed, as its designated tactical role was that of a line-breaker.

The Domitar's slow evolution was further delayed when the isolated Forge World of Xana II -- located at the very edge of the Segmentum Pacificus -- submitted another design able to fulfill the same battlefield role as the intended Domitar -- the Arlatax-class Battle-Automata. Loathe to see so many standard years of research and development go to waste, the Martian Priesthood chose to continue development of the Domitar and refused its benediction to the Arlatax-design, which may well have constituted one of the many reasons Xana II chose to join the Warmaster Horus' camp once the civil wars of the Horus Heresy erupted. In defence of the Martian Magi, it has to be said that even at the prototype stage, the Domitar-class incorporated a new technology that made it superior to the Xanite Arlatax Pattern -- its Graviton Hammers -- which would multiply the destructive force of each of the Domitar's blows. This weapon allowed the Domitar to crash into enemy lines with shattering force, capable of pulverising battle tanks and -- as the wars of the Horus Heresy would show -- even Legiones Astartes Dreadnoughts. To add to the Domitar's durability, its chassis was further shock-protected and enhanced with the addition of a built-in Missile Launcher whose variable payload provided the Domitar a modicum of polyvalence. Satisfying in every regard, the construction templates of the Domitar-class Battle-Automata were distributed to many of the Forge Worlds loyal to Mars, and the Domitar's mass-production began during the the 10th century of the 30th Millennium. 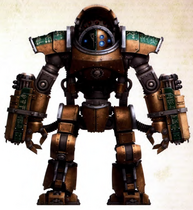 Mechanicum Taghmata Kiarii Domitar-class Battle-Automata of the Forge World of Zhao-Arkhad
Add a photo to this gallery
Retrieved from "https://warhammer40k.fandom.com/wiki/Domitar-class_Battle-Automata?oldid=324579"
Community content is available under CC-BY-SA unless otherwise noted.