The Disc was once a daemonic beast known as a Screamer but was transformed into a Disc of Tzeentch as a gift to an important mortal Champion of Tzeentch or a favoured Daemonic Herald of the Lord of Change.

The Discs still retain their manta-ray like appearance from the Screamer they once were and as a Daemon of Tzeentch they will form tentacles, eyes and spikes at every curved edge of their bodies as well as unleashing mutating flames as they hover across the ground.

Among the devotees of the Master of Magic, there are few possessions more prized than the daemonic mount crafted from a Screamer, known as a Disc of Tzeentch.

An amalgam of daemonic flesh, flashing blades, and burnished metal, a powerful Chaos Sorcerer mounted on a Disc is lethally fast and manoeuvrable, gaining an edge over almost any foe.

Screamers are notoriously difficult to summon and break to the Disc, however. Rarely, the fickle god of change may grant a particularly favoured disciple with a Disc, fully formed and willing to serve. However, for most adherents to the Changer of the Ways, a more difficult path is required.

A Disc of Tzeentch can be forged from the daemonflesh of a Screamer if the practitioner is powerful enough and masters the proper rites and ceremonies. Those sorcerers eager to obtain a Screamer for this purpose hunt the creatures down on the Flaming Tomb in the Realm of Chaos, there to perform the rituals and spells necessary to force the change and subservience upon them.

It is a dangerous undertaking, and more fail than succeed. But for the prestige and tactical advantage of a Disc of Tzeentch, many and more of the servants of Tzeentch are willing to assume the risks.

A Chaos Lord of Tzeentch riding a Disc 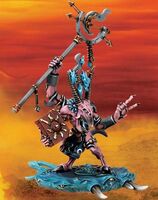 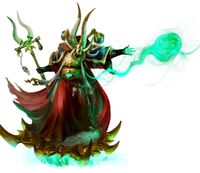 The Thousand Sons Sorcerer Ahriman riding upon a Disc of Tzeentch
Español
Community content is available under CC-BY-SA unless otherwise noted.
Advertisement