The Dire Avengers were the first amongst the Aspect Warriors of the Eldar. They represent the Eldar War God Khaine in his aspect as the noblest of warriors. They are merciless to their foes and unwavering in their devotion to their people.

When in battle, Dire Avengers use their shuriken catapults to create an impenetrable storm of monomolecular blades. They have an uncanny knack of knowing when to follow this onslaught with a lightning-fast assault and when to carefully draw the enemy forward onto their blades. It is rare to find an Eldar force without a squad of these graceful warriors at its heart. 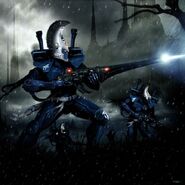 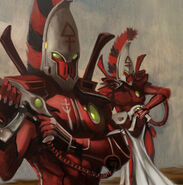 Retrieved from "https://warhammer40k.fandom.com/wiki/Dire_Avengers?oldid=116640"
Community content is available under CC-BY-SA unless otherwise noted.