Digital Weapons, or Digi-Weapons, ostensibly supplied by the Adeptus Mechanicus to the Imperium, owe their provenance to nimble xenos technosavants, known as the Jokaero. Though they are short ranged, they can be triggered to discharge potent laser blasts or jets of flame just as the enemy believes the wearer to be most vulnerable.

They are fitted into rings, or bionic implants of the knuckles of a glove. They lack range, but can be used in melee to take an enemy unaware and cause great harm. The only draw back is that most of these small devices either take a while to recharge the power source or end up being a one time use.

Digital weapons appear to be rings or other jewellery, but are actually powerful ranged weapons of either archeotech or of xenos origin. The most common of these (if common can be used to describe such wondrous items) are crafted by the brightly-haired, ape-like aliens known as the Jokaero. Their creations are so marvellously constructed that even Throne Agents of the Holy Ordos have been known to wear them.

These compact weapon can pack the punch of a full-sized weapon. Digi-versions of hand Flamers, Inferno Pistols, Laspistols and Needle Pistols are just some of the various weapon types that can be acquired. Sometimes, the types of digi-weapons that are desired can vary by the different regions of the galaxy. For example, within the Calixis Sector, two of the most popular types of digital weapons amongst the agents of the Calixian Conclave of the Inquisition are the digi-las weapons, and digital explosives.

Digi-las weapons are usually modelled in the form of rings, and can be used in close combat as a pistol. Digital explosives are made to look like a wide variety of jewellery, are armed by applying precise pressure to certain points, and then thrown. Of course, both have their drawbacks: digi-las weapons take considerable time to replenish their tiny power reserves, and digital explosives are strictly one use only, making them an expensive investment. 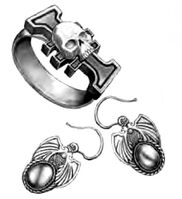 Digital Weapons in the form of an Inquisitorial Ring and a pair of earrings
Add a photo to this gallery
Retrieved from "https://warhammer40k.fandom.com/wiki/Digital_Weapons?oldid=335141"
Community content is available under CC-BY-SA unless otherwise noted.