A TY7 Devilfish armoured troop carrier is the primary anti-gravitic skimmer transport utilised by Tau ground forces and can carry twelve Fire Warriors or Pathfinders into combat in relative safety, and then provide mobile fire support once they disembark.

A resilient and versatile transport, it is the TY7 Devilfish that allows Fire Caste ground forces to successfully execute many of their strategies, whether by rapidly relocating Fire Warriors to new coordinates as part of grand strategic manoeuvers, or punching through enemy lines, guns blazing, to extract Pathfinder teams before they can be overwhelmed. These ubiquitous transports are exceptionally popular with the Fire Caste, and their courageous pilots are offered great respect.

The ubiquitous Devilfish chassis consists of a sleek and light design powered by complex dual anti-gravitic and jet-propulsion motive systems so that a Devilfish almost glides over a planet's surface. The anti-gravitic engines generate "cushions" of air upon which the Devilfish floats, and its armoured bulk is then driven forwards by its two powerful multi-directional thruster jet engines mounted on the rear sides of the hull. By pivoting the propulsion units downwards, a Devilfish pilot can gain extra lift to clear the many obstacles and terrain that often litters a battlefield; obstacles that more mundane tracked vehicles can never hope to traverse. There are also two lift fins mounted on the front, each with a recess to house a weapon system or a Gun Drone. Since the Devilfish was designed with troop transport in mind, the pressurised interior has the space to fit 12 Fire Warriors along with all of their equipment and weapons. The vehicle also features a hatch on each side along with a door in the rear to allow troops inside to disembark and set up into a firing position quickly. The armour of the vehicle is made from a dense nano-crystalline metal, named Fio'tak in the Tau Lexicon, that is light, malleable, strong and corrosive resistant; reducing the weight of the vehicle whilst also providing excellent protection. There is only one crew member that pilots the Devilfish, operates the nose-mounted Burst Cannon, and manages the communication and tracking systems. All other systems are drone-controlled.

The TY7 Devilfish is primarily an armoured personnel carrier and is often considered the workhorse of Tau ground forces, with the capacity to carry a fully armed and equipped Fire Warrior squad rapidly to the frontlines in relative safety. Once the Fire Warriors have been dropped off, the Devilfish continues to act as mobile fire support, providing anti-infantry firepower where it is most needed. Mobility is essential for any Tau Commander, and Devilfish allow their infantry to keep pace with a Hunter Cadre’s armoured gunships. Whether manoeuvring troops to deliver the killer offensive of a Mont’ka, or rushing them into ideal firing positions to ensure a Kauyon ambush is perfectly set, Devilfish are often key to Tau victories.

However, Devilfish are not only used to merely ferry troops to the frontlines. In addition to the fearsome firepower provided by its Burst Cannon, a Devilfish is often on hand to extract Tau troops should enemy formations be in a position to overwhelm the Tau gunline, or if the Tau Commander decides that a tactical withdrawal is necessary. Given the Tau’s loathing of close combat, a common tactic is to redeploy their gun lines when enemy units approach; whisking troops out of harm’s way to setup new firing perimeters elsewhere on the battlefield. This re-embarking and relocation tactic allows Pathfinders to escape encirclement and helps Fire Warriors keep their foes at arm’s length, better enabling them to whittle down the enemy with repeated volleys of pulse fire. In this way, they enable a Tau force's hit-and-run tactics, and are the bane of many an Imperial commander. Devilfish are usually transported inside a Manta, which can carry four fully-loaded Devilfish from orbit to the ground, and then once more to the battlefront; allowing Devilfish to be deployed exactly where and when they and their troops are needed.

A TY7 Devilfish is primarily armed with a nose-mounted Burst Cannon and a hull-mounted secondary weapon system. The nose-mounted Burst Cannon provides rapid-firing suppressive anti-infantry fire, acting as a self-defence weapon that can also be used to complement the fire of a disembarked squad. Devilfish are equipped with landing gear as standard, in the case of failure of the thruster engines, or for when the vehicle is simply at rest and deactivated.

Secondary weapons are mounted in the front recesses of the transport and are primarily deployed to provide anti-infantry fire support. The vehicle's secondary weapons can include either of the following:

Devilfish transports can also be equipped with any of the following Tau vehicle upgrade systems:

A TY7 Devilfish with Fire Warrior for size comparison

A TY7 Devilfish transport of the T'au Sept

A TY7 Devilfish used to transport Pathfinders during the Taros Campaign

A TY7 Devilfish used during the Taros Campaign, painted in night camouflage

A TY7 Devilfish transport of the Farsight Enclaves

Dorsal view of a TY7 Devilfish of the T'au Sept; Devilfish transports bear the same team markings as their assigned squad, along with identification markers and slogans 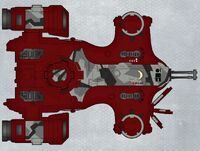 Dorsal view of a TY7 Devilfish of the Farsight Enclaves
Español
Community content is available under CC-BY-SA unless otherwise noted.
Advertisement