The Destroyer Tank Hunter of the Imperial Guard is a true relic. Once a commonly-employed Imperial tank on the battlefield, they are now few and far between in the Imperial Guard's order of battle. These tanks are equipped with a powerful weapon known as a Heavy Laser Destroyer and make excellent tank hunters. However, due to the painstakingly complex task of building each weapon by hand and the very few Forge Worlds that remain still capable of manufacturing them, there are fewer and fewer of these tanks deployed across the Imperium. The Imperial Guard units that have any of these tanks in their possession guard them jealously and take great care to ensure they are always patched and repaired after every conflict they participate in. If one is lost during battle it is a priority to salvage the remains, for while the main gun is nearly irreplaceable, the hull can be easily repaired and refitted with other weapons. For instance, the Thunderer Siege Tank is just a Destroyer Tank Hunter hull mated with a Demolisher Cannon.

The Destroyer Tank Hunter is equipped with a powerful laser weapon known as a Heavy Laser Destroyer which is more than capable of destroying most other armoured units in one hit. The main weapon is off-set to the left side of the vehicle giving it increased stability and making the overall size of the tank smaller and harder to target. This also allows both the tank's commander and gunner to use the weapon sights. The tank is built using the common Mars Alpha tank chassis, simply modified by removing the turret ring and replacing it with a crew hatch and two internal maintenance hatches. Due to the readily available spare parts for the tank, this allows salvaged wrecks to be repaired and retrofitted with other weapons whilst the unit awaits a replacement for the Heavy Laser Destroyer that may never come in their lifetime. The tank is able to be equipped with other wargear when needed such as Camouflage Netting, Extra Armour Plating, a Hunter-Killer Missile Launcher, Improved Communications Equipment, a Mine Sweeper, a Pintle-mounted Heavy Stubber or Storm Bolter, Rough Terrain Modifications, a Searchlight, Track Guards and Smoke Launchers.

The Destroyer Tank Hunter is an excellent anti-armour vehicle capable of sniping enemy tanks from a distance and then moving to another location to repeat, although these tanks are not as useful during a direct assault or a close-range engagement due to their lack of a rotating turret and secondary weapons. The Destroyer Tank Hunter is best deployed out of the way of danger, near the rear of the unit so as to take advantage of its long-range accuracy.

Destroyer Tank Hunter in position for an ambush 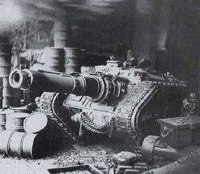 Destroyer Tank Hunter of the Dnieper 9th Tank Corp, outfitted with a Dozerblade

An Imperial schematic of a Destroyer Tank Hunter
Add a photo to this gallery
Retrieved from "https://warhammer40k.fandom.com/wiki/Destroyer_Tank_Hunter?oldid=300893"
Community content is available under CC-BY-SA unless otherwise noted.