"Bravery is stronger than Adamantium. One is the stuff of the soul-forges, the other an illusion of safety created by fools. Adamantium walls cannot keep us out! We have the courage of the Emperor! And in the Emperor's name...ATTACK!! ATTACK!! NO PRISONERS!!"

The Desert Lions is a Loyalist Space Marine Chapter of unknown Founding and heritage. It is known to have fought in the military campaign known as Operation Carthage carried out in the early 31st Millennium, following the defeat of the Warmaster Horus and the Traitor Legions. Operation Carthage sought to retake the world of Istvaan V from the Forces of Chaos who had controlled it since the first days of the Horus Heresy. Little else is known about the Chapter in current Imperial records.

The Desert Lions' Chapter colours are not listed in current Imperial records.

The Desert Lions' Chapter badge is not listed in current Imperial records.

In The Horus Heresy: Book Five - Tempest, one of the old cognomina taken up by an Ultramarines Legion constituent Chapter before the arrival of Primarch Roboute Guilliman was the "Desert Lions." It is not stated to which Chapter of the XIII Legion this refers, nor what happened to it during the Horus Heresy or the Second Founding. It is unknown at this time whether it served as the basis for the formation of a full Ultramarines Successor Chapter just as the 22nd "Nemesis" Chapter became the Nemesis, and the 4th Chapter, the "Aurorans," became the Aurora Chapter. 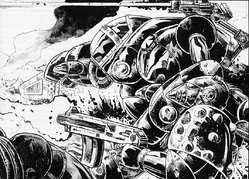 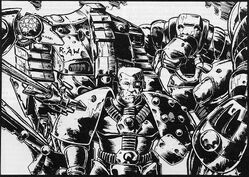 Techmarine Saul Lliamson with his Robot maniple, just prior to Operation Carthage.
Add a photo to this gallery
Retrieved from "https://warhammer40k.fandom.com/wiki/Desert_Lions?oldid=327738"
Community content is available under CC-BY-SA unless otherwise noted.