The Demiurg are an intelligent alien race of short, stocky humanoid traders and asteroid miners allied with the T'au Empire.

The Demiurg reside on the far Eastern Fringe of the Milky Way Galaxy and are also found less often deep in areas like the Ultima Segmentum. They are still an uncommon sight in the Imperium, despite the number of sightings of them having increased over recent centuries.

They are almost purely space-borne in their massive and majestic commerce vessels. Their history is unconfirmed, as are their origins, intentions and current threat to others. All that is known about them is speculative at best.

The Demiurg are known to have an alliance with the T'au, serving as economic allies of the T'au Empire. They were initially introduced to the T'au via their mutual relations with the Kroot.

From the Demiurg, the T'au acquired their knowledge of Ion Cannon technology, which is now used heavily by the T'au in their armies and fleets. Two Brotherhoods of Demiurg, the Srry'Tok and Thurm, are known to have joined the T'au Empire outright.

Currently, it is unknown if the Demiurg are full members of the T'au Empire, allies, or mercenaries in their service. What is known is that they are involved heavily in commercial and economic relations with the T'au.

The Demiurg appear to have no homeworld, or at least to have abandoned it in favour of spacecraft. They are known to avoid Imperial space unless invited in, making them a very uncommon sight, and are described as defensively hostile and non-militaristic.

However, the number of sightings of the Demiurg in the Ultima Segmentum has increased over recent centuries. The Demiurg are known to be organized into "Brotherhoods." However, any further information on the numbers, political structure, economic and military weight of a Demiurg Brotherhood is unknown beyond the rumour that one Brotherhood is typically present upon a given Bastion-class Commerce Vessel and two to three on a given Stronghold-class Commerce Vessel.

At least two Brotherhoods, the Srry'Tok and Thurm, are known to have joined the T'au Empire.

The Demiurg appear to have no homeworld or at least have abandoned it in favour of living on their spacecraft, and as such have a high level of technology invested in their vessels since they are required to perform a number of tasks; Stronghold-class vessels, for instance, are used as factories and processing units, whereas Bastion-class starships are more often configured for use in asteroid mining.

A possible reason for this exodus is that the opportunities for commerce generated by manufacturing items on-location in the starships are very lucrative, although this is entirely speculative.

Larger Demiurg vessels are primarily automated and use electromagnetic fields to scoop up interstellar hydrogen, which is then compressed inside the vessel and ejected towards the rear, creating a form of fusion ram-jet engine. The engines of Demiurg starships are relatively slow in comparison to Imperial starship technology; however, the complex shielding the system requires, and the beneficial side-effects of its use are as of yet still unfathomed by the Adeptus Mechanicus.

Aside from developing ionic weapons, the Demiurg appear to remodel a lot of their weaponry from technology already developed for use in resource gathering and manufacturing. Two examples of this onboard their spacecraft are the Cutting Beam, which appears to have been adapted from high-powered lasers used to mine asteroids, and automated mining machines, which, once reconfigured, are launched as attack craft against enemy ships.

The Demiurg have notable traits shared with the typical high fantasy Dwarf stereotype, although they are not explicitly described as being like Dwarfs.

For example, they are avid miners, expert traders, more technologically advanced than Humans and apparently bear a particular hatred for Greenskins (which are represented by the Orks in the Warhammer 40,000 universe).

The term "Demiurg" is derived from the ancient Greek word meaning "artisan" or "craftsman" and is the title given in some belief systems (most notably Gnosticism) to the deity that created the physical universe. It is therefore befitting that such a race would be expert crafters. The name also resonates with the Demiurgs' short stature.

It is frequently suggested (and often assumed) that the Demiurg are an attempt by Games Workshop to reintroduce the Abhuman Squat race that was removed from the game for reasons known only to the company, but they would be better understood as an attempt to reintroduce the "Space Dwarf" image that had not been present in the game after the removal of the Squats in the late 1990s and before their return in 2018.

There are clear similarities between the Demiurg and the Bentusi from the Homeworld series of computer games; both races are almost entirely space-bound, with no home planets, and both the Bentusi and Demiurg sell other races Ion Cannon technology.

Furthermore, in the T'au Lexicon, the Demiurg are known as "Bentu'sin", which translates as "wise-gifted ones." This connection may not be surprising, as Homeworld was developed by Relic Entertainment, the developers behind the popular Warhammer 40,000 PC game Dawn of War. 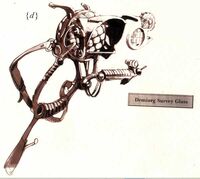