This weapon system is believed to have only been used with the Deimos Pattern Whirlwind. There are still some Space Marine Chapters that retain the precious knowledge required to manufacture this relic vehicle, and for them, the Whirlwind Scorpius still remains a potent weapon of war. The Whirlwind Scorpius is also available in small numbers to the Chaos Space Marine Traitor Legions and warbands that trace their lineage back to the time of the Heresy.

The term "Whirlwind" was used amongst the Legiones Astartes to describe a range of vehicle-mounted multiple missile launcher systems, many of which had been recovered during the Great Crusade and were undergoing front line trials with various units. The Scorpius was a pattern that had only recently entered service during the opening years of the Horus Heresy, having been created at the behest of the Space Wolves Legion to aid in the campaign against the fortified bastion-cities of the xenos Ghassulian Sub-realms. Fighting alongside Legion Predators, with which it shares many common armour and drive systems, the Scorpius had proven itself well suited to high-intensity operations and had been approved for service across the entire Legiones Astartes.

The vehicle's Scorpius Multi-Launcher was a prototype weapons system intended to replace the standard Whirlwind armament which was undergoing battlefield testing at the outbreak of the Horus Heresy. This weapon system made use of implosive warheads that were devastating to armoured infantry and light vehicles. As well as the launcher itself being capable of more rapid fire than its predecessor, the Scorpius' rocket munitions were designed to concentrate their force in a more confined area, greatly increasing their destructive potential.

The weapon's complex munitions and intricate drum-fed design has led the Scorpius Multi-Launcher, and the vehicle itself, to become an example of a much honoured vehicle type that no longer exists widely within the known canon of STC machine lore in the 41st Millennium save by those few Chapters that still manufacture them. Like so many other so-called relic war machines, those few that still exist are ancient, irreplaceable vehicles held as holy artefacts by the Adeptus Astartes. The ancient launch system, targeting mechanisms and ammunition feed utilised by these Relic Scorpius Whirlwinds are unlike any other model in common use in the 41st Millennium.

These systems utilise strands of machine canon that are barely understood by the Adepts of the Adeptus Mechanicus and as such they are held in a mixture of awe and reverence by Tech-priests and Techmarines alike. For the latter however, the Scorpius represents a legacy of an age of dread, a memory all but forbidden to conjure forth. That age is the Horus Heresy, when the Legiones Astartes turned upon one another and brother slew brother in the most calamitous civil war in Mankind's long and bloody history.

The very existence of the Whirlind Scorpius serves as a direct reminder of the dire events of the Horus Heresy, for it was conceived to engage heavy armoured infantry. History does not recall if the vehicle entered service before the outset of the Heresy or if it was conceived only after the civil war had begun. The weapon certainly saw widespread use amongst the Legiones Astartes, whether loyal to the Emperor or to the Warmaster, for it was ideal for cracking open the ceramite battle plate worn then as now by Space Marines. The Scorpius is therefore regarded by many as a direct and bitter reminder of the mass fratricide that consumed the Emperor's Legions and brought the nascent Imperium to the very brink of destruction. To field it is to summon forth the ghosts of the distant past and to witness anew the crimes of warriors once hailed as Mankind's greatest champions.

Because of the deep-seated significance of the Whirlwind Scorpius, it is rarely called forth from the stasis chambers of the fortress-monasteries, even when Space Marines are to confront a heavily amroured foe against which the weapon would be highly effective. When the Scorpius is awakened from the reliquaries, it is to engage in battle against the hated traitors that still serve those dark powers to which they sold their souls in a former age almost as if the ten thousand years since the Horus Heresy had never passed at all. The hatred of that bygone age is summoned forth to fuel both sides, the Whirlwind Scorpius serving in the capacity in which it once excelled -- cutting down the Traitors to humanity with brutal, fratricidal efficiency.

The Deimos Whirlwind Scorpius is similar in every way to the standard Deimos Pattern Whirlwind, with the exception of its main weapon system. The Scorpius variant replaces the standard Whirlwind Multiple Missile Launcher with the Scorpius Multi-Launcher. The Scorpius Multi-Launcher is a drum-fed Rocket Launcher that makes use of special implosive warheads that are extremely effective against armoured infantry, such as Space Marines, and light vehicles. The vehicle is also armed with pintle-mounted twin-linked Bolters, a Searchlight, and Smoke Launchers. The vehicle can be equipped with a Hunter-Killer Missile Launcher, a Dozer Blade, and Extra Armour Plating.

A Relic Deimos Whirlwind Scorpius is armed and equipped with:

The Relic Deimos Whirlwind Scorpius can be armed with the following pintle-mounted weapon:

Any Relic Deimos Whirlwind Scorpius can be outfitted with the following vehicle equipment:

During the Great Crusade and Horus Heresy the Deimos Whirlwind Scorpius tanks of the Legiones Astartes featured different loadout options than those still found during the 41st Millennium.

A standard Legion Deimos Whirlwind Scorpius is armed and equipped with:

The Legion Deimos Whirlwind Scorpius can be armed with the following additional pintle-mounted weaponry:

Any Legion Deimos Whirlwind Scorpius could be outfitted with the following vehicle equipment: 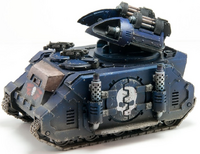 A Deimos Whirlwind Scorpius of the Night Lords Legion 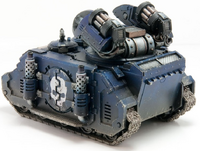 A Relic Deimos Whirlwind Scorpius of the Space Wolves Chapter during combat
Add a photo to this gallery
Retrieved from "https://warhammer40k.fandom.com/wiki/Deimos_Whirlwind_Scorpius?oldid=346349"
Community content is available under CC-BY-SA unless otherwise noted.