The Deimos Rhino, also known as the Deimos Pattern Rhino, is a variant pattern of the Rhino armoured personnel carrier (APC) used by the Imperium of Mankind's military forces.

The Deimos Pattern Rhino was the most common Rhino pattern in use during the Great Crusade and Horus Heresy in the late 30th and early 31st Millennia, and served as the transport of choice for the Space Marine Legions, the Legio Custodes, the Sisters of Silence, the ancient Mechanicum, and in limited numbers by the regiments of the Imperial Army.

The Deimos Pattern Rhino would eventually be replaced by newer marks and patterns, and it is no longer produced by the Adeptus Mechanicus. The Mars Pattern Rhino has become the standard Rhino used at present by the Chapters of the Adeptus Astartes, although some Chapters still maintain the use of relic Deimos Rhinos out of respect and tradition.

The Deimos Rhino, like all Rhino patterns, is relatively easy to construct, highly durable and easy to repair in the field, and is able to run off of almost any fuel source, all characteristics that were, and still are, highly prized by the Imperium.

The Rhino APC has been in the Imperium's service for over ten thousand Terran years, but its true origins stretch back further still, into the depths of humanity's past. Curiously, the surviving documents on the past of the Rhino APC are almost completely intact, and give an accurate early history of the vehicle.

Ancient records show that the Rhino originally began life as the RH1-N-0 Tracked Exploration and Multi-Purpose Defence Vehicle, for use by colonists and explorers as Mankind spread throughout the galaxy colonising new worlds and was considered a Standard Template Construct (STC) design.

The Human colonists of the Age of Technology needed a robust, tracked, all-terrain vehicle, sealed against hostile environments and providing some measure of protection against potential hostiles. The first Rhino was field-tested on Mars, and proved to be a great success.

As it was capable of being constructed from any locally available materials, and powered by nearly any fuel source, the popularity of the Rhino spread rapidly. Soon, Rhinos became common sights on Frontier Worlds all over human-settled space.

The Rhino's position of dominance came to an end with the Age of Strife, as Mankind's golden age of technology and interstellar exploration ended in bloody warfare that engulfed almost every Human colony. By the end of the Age of Strife, and the emergence of the Emperor of Mankind, almost all of the complete STC databases from the Age of Technology had been lost or utterly destroyed.

The remaining Rhinos were slowly wiped out by attrition. Only the work and dedication of the Mechanicum saved the Rhino and several other STC designs of ancient technology from being lost forever. The reliability of the original Rhino design meant that it has changed little over the intervening millennia.

The earliest known use of the Rhino in combat is recorded in the ancient Liber Armorum. According to this text, it was first used in combat by the Human colonists of Torben's World against unknown indigenous xenos creatures who possessed only a primitive, pre-industrial technological level.

The Rhinos formed the spearhead of the human colonists' attack, against which the aliens' primitive black powder firearms proved of little use. The xenos were purged from Torben's World, leaving the colonists' settlement unimpeded.

Over the following 100 standard years, use of the Rhino spread to many Human military forces. Early commanders adopted the basic chassis design as an armoured fighting vehicle, fitting various new weapon systems to it and augmenting the vehicle's engine power.

In time, the vehicle became the standard fighting vehicle of Human armed forces across the galaxy. Recovered STC databases provided the early Imperial armies with Rhino variants still in use today, such as the Predator, Immolator and Whirlwind.

There are many other variants, now lost to the depths of time, only awaiting rediscovery.

The Deimos Rhino is armed with a set of turret-mounted, forward-firing twin-linked bolters located on the top of the vehicle. The bolters are controlled remotely from inside the vehicle and are slaved to the vehicle's target-logis (cogitator) systems.

The twin-linked bolters can be both removed entirely, or replaced by a single, manually-controlled Pintle-mounted weapon such as a twin-linked bolter (Combi-bolter), or other types of Combi-Weapons, a Heavy Bolter, a Heavy Flamer, or a Havoc Missile Launcher.

These weapon options were also available to the Mars Pattern Rhinos used at the time, but would eventually fall out of use.

The vehicle's weapons were positioned on top of the crew hatches, but the hatches could still be opened to allow the crew to get in and out of the vehicle.

The Deimos Rhino, and potentially all Rhino patterns built during these ancient times, were equipped with forward-mounted spikes used to protect the tank from obstacles and could cause damage to enemy armour if used as a battering ram, the spikes could also impale any unfortunate infantryman who is too slow to move out of the vehicle's path.

The Deimos Rhino can be outfitted with an auxiliary drive system which improved the vehicle's already impressive drive train that could operate even when partially damaged.

The vehicle could be equipped with several other types of optional upgrades, including a Dozer Blade, a Hunter-Killer Missile Launcher, Extra Armour Plating, a Searchlight, and Smoke Launchers.

A standard Deimos Rhino is armed and equipped with:

A Deimos Rhino may take one of the following pintle-mounted weapons*:

Rhinos may also have a variety of vehicle equipment such as:

*When an additional, manually-operated, pintle-mounted weapon is equipped, the Deimos Rhino's remote-operated Bolters are combined into a single mount.

The most common pattern of the Deimos Rhino is the Mark Ic, which was one of the last iterations of the Deimos Pattern Rhino chassis to be mass-produced for use by the Space Marine Legions during the Great Crusade and Horus Heresy.

It is unknown what other marks of the Deimos Pattern exist, although many Deimos Predators and its variants make use of a Deimos chassis of an unknown mark.

A later mark of Deimos Rhino chassis, possibly the last, was the Mark IIc.

The Mark IIc replaces the turret-mounted twin-linked bolters of the Mark Ic that were slaved to the target-logis systems of the vehicle's Machine Spirit with a pintle-mounted Combi-bolter, much like the Mars Pattern Rhino.

Any surviving Mark IIc Deimos Rhinos used by the Imperium after the Horus Heresy and Great Scouring would eventually be upgraded with Storm Bolters in place of their now outdated Combi-Bolters.

The Deimos Rhino chassis is used as the base from which many other Imperial military vehicles are constructed, including the:

The Rhino Advancer was a Deimos Rhino with an extended troop compartment capable of carrying more soldiers into battle than the standard APC. The Rhino Advancer was used during the Great Crusade and Horus Heresy eras, but has since fallen out of use with most Chapters of the Adeptus Astartes. The Advancer featured an open-top design that allowed the Astartes inside to more quickly deploy from the vehicle.

Although the Razorback is a relatively new addition to the Imperium's arsenal, the Deimos Rhino chassis was still able to be outfitted as a Razorback. The Razorback replaces some of its transport capacity in order to mount a remote-controlled turret on top of the vehicle. The Razorback is usually armed with twin-linked Heavy Bolters or twin-linked Lascannons.

The Deimos Whirlwind serves as the Space Marines' primary long-range fire support vehicle. The Whirlwind gives up its transport capacity in order to mount a Whirlwind Missile Launcher on the top of the vehicle. The vehicle is capable of unleashing powerful missile salvos at enemy forces from long-range. The Whirlwind has several of its own variants, such as the Hunter and Hyperios anti-aircraft variants.

The Deimos Vindicator is used by the Space Marines as a siege tank, and is armed with a Demolisher Cannon which is used against enemy structures. The Vindicator is also commonly equipped with large dozer blades known as Siege Shields that protect the tank from enemy fire and allow it to move rubble and debris out of the way.

The Grav-Rhino was used during the Great Crusade and Horus Heresy by the Legio Custodes and the Sisters of Silence. The Grav-Rhino was an experimental version of the Rhino that used anti-gravitic plate technology reverse-engineered from the vehicles of the Eldar to keep the vehicle in motion off the ground. The designs for this variant have been lost by the Imperium, and it is unknown if the Adeptus Custodes or Sisters of Silence still maintains any Grav-Rhinos in their armoury in the late 41st Millennium.

An ancient pict-capture of a Deimos Rhino of the Sons of Horus Legion, side view

An ancient pict-capture of a Deimos Rhino of the Death Guard Legion, side view

An ancient pict-capture of a Deimos Rhino of the Emperor's Children Legion, side view

An ancient pict-capture of a Deimos Rhino of the Iron Hands Legion, side-view

An ancient pict-capture of a Deimos Rhino of the Night Lords Legion, side-view

An ancient pict-capture of a Deimos Rhino of the Salamanders Legion, side-view

An ancient pict-capture of a Deimos Rhino of the Word Bearers Legion, side-view 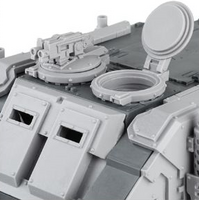 A Deimos Rhino with its twin-linked Bolters combined onto a single mount, allowing for an additional pintle-mounted weapon to be added to the open hatch
Community content is available under CC-BY-SA unless otherwise noted.
Advertisement