Defence Turrets, also known as Base Defence Turrets, are large static weapon emplacements used by the Imperium of Mankind to protect important structures and other strategic facilities from enemy attack. Defence Turrets are mounted on top of a large set of stabiliser legs using versatile anti-air mounting systems that give the turret the capability of engaging both enemy air and ground units. The Defence Turret is capable of being locked onto the tops of Imperial pre-constructed modular buildings, such as the common Phaeton Pattern Defence Turret, or simply mounted onto rockcrete platforms built into the ground. The turrets can also be part of other Imperial structures such as Defence Lasers and fortress walls. The most common pattern of the Defence Turret in use by the Imperium is the Phaeton Pattern. It is unrecorded in Imperial records whether or not the Defence Turret was manned by Imperial personnel or Servitors located either inside or nearby the weapon or if it is automated using a Machine Spirit (Aritficial Intelligence) much like the Tarantula Sentry Gun.

The most common armament of the Defence Turret is a set of twin-linked, long-barrelled Autocannons. These weapons are fully capable of engaging and destroying most enemy ground vehicles and aircraft with their explosive fire. Each Defence Turret armed with these weapons also has storage for up to 20,000 rounds of ammunition, allowing them to go long periods of time without needing to be reloaded. Imperial records do not indicate whether or not the Defence Turret can be armed with any other types of weapons. Defence Turrets can be outfitted with searchlights to help them identify their targets.

The Defence Turret has a single known variant in Imperial records, the Communications Array:

The following are known recorded uses of the Defence Turret: 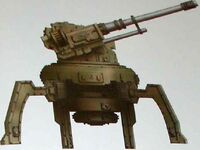 A set of Defence Turrets protecting an Imperial Defence Laser from enemy aircraft
Add a photo to this gallery
Retrieved from "https://warhammer40k.fandom.com/wiki/Defence_Turret?oldid=218658"
Community content is available under CC-BY-SA unless otherwise noted.