A Deathwing Knight is a fell-handed warrior of the Dark Angels Space Marine Chapter, a member of the elite 1st Company, called the Deathwing, whose glorious deeds on the field of battle are matched only by his unflinching devotion to the Chapter.

Deathwing Knights represent the elite of the 1st Company and members of its Inner Circle, privy to many of the Dark Angels' most closely-held secrets.

Deathwing Knights are a truly imposing sight, for in them lives on some semblance of the Lion himself. They embody silent strength and a veiled, yet still palpable nobility.

None but the most fell-handed of warriors from the 1st Company are promoted into the Inner Circle of the Deathwing, and displaying skill in battle is not enough to receive the honour of knighthood. A warrior must be wholly dedicated to the Chapter, and must display an obsessive need to carry on the Chapter's secret crusade to hunt down the remaining Fallen.

When a member of the Deathwing is deemed worthy of the honour, he is brought into the Chamber of Judgments in The Rock to face a series of challenges, each of which has been individualised to test the candidate's strength, resolve and loyalty to the Chapter past any breaking point he may possess.

Should the Astartes prevail in these tests, the warrior is granted the title of Knight and passes beneath the shadowed arch at the heart of the Chamber of Judgements. The Watchers in the Dark present to him a Mace of Absolution and a Storm Shield -- both priceless heirlooms from the time of the Great Crusade in the late 30th Millennium, with powers beyond even the potency of the Astartes who will bear them.

In battle, the Deathwing Knights are used as a heavy shock force -- they teleport into the fight with Storm Shields locked. With incoming fire ricocheting off them, the Knights march forward to assault the greatest threat with impunity, first slamming into the foe with their Storm Shields before laying into them with their Power Maces and Flails.

Each wields a Mace of Absolution, its spiked head glowing with power and emanating an eerie mist from its numerous vents. The sound of Deathwing Knights connecting with the foe is like the impact of an out of control mag-train.

Storm Shields are the first to slam against the enemy, the blows to their energy fields sending sizzling sparks. Thunderclaps follow as their maces pulverise armour, maul flesh and break bones.

Even towering Tyranid monstrosities fall before the onslaught of the Deathwing Knights.

In the presence of a Heretic, the Knights of the Deathwing power up their ancient weapons to deliver a killing blow of earth-shattering force.

A Deathwing Knight Master is the leader of a unit of Deathwing Knights; each is a Company Master in training, for there is no finer proving ground than this august brotherhood. To each Deathwing Master is given a brutal weapon of antiquity – a Flail of the Unforgiven.

Swirling the heavy flail-heads into a whirlwind of deathly destruction, a Deathwing Master can smite his way through an enemy horde, leaving a bloody trail of broken bodies in his wake. A mysterious Watcher in the Dark often accompanies a Deathwing Master, carefully observing his every move.

The appearance of Deathwing Knights upon a battlefield is portentous, for they are rarely deployed without either great need or a strong prospect of the Fallen’s involvement. They are the Chapter's ultimate death-dealers, and often their only appearance in a campaign will be at its final battle, where a single squad of Deathwing Knights will teleport in to annihilate the greatest of threats.

So have towering war machines, mighty xenos creatures, despotic rulers and Greater Daemons been destroyed, and wars that have lasted for hundreds of Terran years ended in a single, bloody moment.

They are the first among the warriors of both their company and indeed the entire Dark Angels Chapter, and it is a martial honour they continue to uphold.

As befits the most elite veterans of the esteemed and prestigious 1st Company of the Dark Angels and their Successors, the Deathwing Knights are outfitted with the most revered and potent wargear their Unforgiven Chapter possesses.

As heirs to the long-lost knightly orders of Caliban, each of them is garbed in an ancient suit of Indomitus Pattern Terminator Armour, completed with a hooded robe and embellished to resemble the armours of the Calibanite Knights of old.

In one hand they bear an ancient Storm Shield carefully embossed with the heraldry of their Chapter, reinforcing the aspect of an ancient knight marching to war. In their other hand they bear a Mace of Absolution, a priceless heirloom from the times of the Great Crusade, a Power Weapon which resembles a Thunder Hammer but which is much more flexible and less ungainly to wield in combat.

The leader of the Knights, the Knight Master, is presented with an even more rare and revered weapon called a Flail of the Unforgiven, whose multiple heads can deliver tremendous damage in one fell blow.

The Deathwing Knights are often accompanied by one or more Watchers in the Dark, although to what purpose the diminutive beings follow the mighty Terminators, or why the Astartes tolerate its seemingly xenos presence, is only known to the Knights themselves. 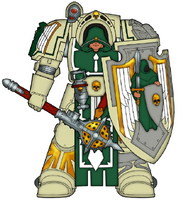 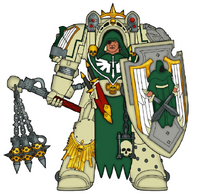 A squad of Deathwing Knights accompanied by a Watcher in the Dark
Add a photo to this gallery
Retrieved from "https://warhammer40k.fandom.com/wiki/Deathwing_Knight?oldid=355043"
Community content is available under CC-BY-SA unless otherwise noted.